The Biden-Suga Summit: Heavy on Symbols, Light on Specifics 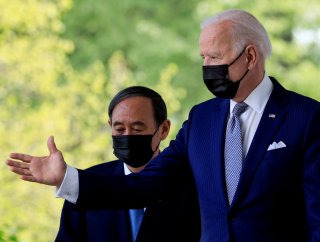 The weak are meat; the strong eat. That Japanese proverb, akin to Thucydidean themes with a bit more poetic flair, seems an apt characterization of the Indo-Pacific region that U.S. president Joe Biden and Japanese prime minister Yoshihide Suga sat down to discuss on April 16 in Washington. Facing China’s massive military modernization and buildup, both leaders pledged to strengthen their alliance and regional security. Nowhere is that commitment more important than in Taiwan. The Chinese Communist Party’s avowal to forcefully “recover” the small island by 2049 makes Taiwan a sitting duck. The United States and Japan are determined to prevent it from becoming Beijing’s meat.

In that effort, Biden and Suga issued a post-summit communique that referenced Taiwan for the first time since 1969. “We underscore the importance of peace and stability across the Taiwan Strait and encourage the peaceful resolution of cross-Strait issues,” the statement read. Zooming out of the Strait, the two leaders also “shared their concerns” over Chinese actions that disrupt the “international rules-based order.” The word “China” only took up five of the statement’s roughly 2,000 words, but the summit’s ultimate mission to announce and outline a “U.S.-Japan Global Partnership for a New Era” left little doubt over which country brought these two historic allies closer together.

Last month, both countries’ defense chiefs agreed to cooperate in the event hostilities broke out between China and Taiwan. China’s provocative actions towards Taiwan this past year warrant the stern announcement. In 2020, the Chinese People’s Liberation Army (PLA) flew 380 sorties into Taiwan’s air defense identification zones (ADIZs) to normalize such aggressive actions and eventually whittle away Taiwan’s ability to defend itself. This month alone, China sent twenty-five bombers and fighters into Taiwan’s ADIZ (the largest sortie this year), executed exercises with its Liaoning aircraft carrier near Taiwan, and protested the USS John S. McCain, a destroyer, sailing through the Taiwan Strait. In light of these provocations, the Biden-Suga summit elevated the Taiwan issue to the highest levels of political leadership in Washington and Tokyo. It recognized that maintaining peace and stability in the Taiwan Strait was not just a military issue but also a pressing geopolitical crisis. Unfortunately, the summit—like the March defense chiefs meeting before it—personified ambiguity. Despite the pledges and commitments, the summit offered few policy specifics on how the two countries would cooperate during a Taiwan Strait crisis. To deter China and defend Taiwan, that must change.

In the art of diplomacy, symbolism and subtlety are paramount.

Taiwan’s inclusion in a U.S.-Japan communique, after a half-century absence, speaks volumes to the renewed Western urgency to protect Taiwan. Biden’s choice to invite Suga—the first foreign leader to visit the Biden White House—underscored the significance his administration places in strengthening America’s relationship with Japan, a “close ally and good partner” as Biden put it. Both symbols forewarn Beijing of the two nations’ commitment to upholding the Indo-Pacific regional order irrespective of Chinese aggression.

But symbols are not enough, especially when paired with the communique’s cautious language. The one sentence that referenced Taiwan fell short of expectations—of both the past and present. Before the summit started, one senior U.S. administration official promised a “formal [joint] statement” about the “cross-strait circumstances on Taiwan” that pledged the “maintenance of peace and stability” and the preservation of the status quo. While trivial at first glance, the final communique omitted the second pledge. It only promised to peaceably resolve Taiwan issues, which allows China to subjugate Taiwan, as long as no blood is shed.

The Biden-Suga communique failed to match historical expectations. In the November 1969 communique from Japanese prime minister Eisaku Sato and U.S. president Richard Nixon—the last time a summit statement mentioned “Taiwan”—Nixon promised to uphold American treaty obligations towards Taiwan. Sato called “the maintenance of peace and security in the Taiwan area…a most important factor for the security of Japan.” In short, Washington vowed to defend Taipei, and Tokyo interwove its security with Taipei.

It’s true, times and geopolitics have changed. Three years after the Nixon-Sato summit, Japan normalized relations with the People’s Republic of China (PRC). The United States followed suit seven years later. But if Washington and Tokyo continue to offer more privileges, access, weapons, and security guarantees to Taiwan, then they should clearly declare what their actions have implied. Future statements (joint or otherwise) should note the Biden administration’s intention to uphold the Six Assurances, the Three Communiques, and the Taiwan Relations Act. Japan should acknowledge that its security depends on Taiwanese security. And both countries must promise to preserve the status quo. The time for strategic ambiguity has passed.

Most Japanese leaders eschew a hawkish stance on Taiwan for fear of inciting Beijing’s wrath—with valid reason. The physical distance between Washington and Tokyo is six times longer than the distance between Tokyo and Beijing. Being situated so close together makes a stable Sino-Japanese relationship of “great importance,” as Suga recently admitted. But the Japanese should not let fear of Chinese repercussions impede crisis planning and preparation. In fact, Chinese threats towards Japan’s Taiwan policy have been empty and trite. Before Suga and Biden sat down to talk, the CCP’s propaganda tabloid, Global Times, warned that if the post-summit statement mentioned Taiwan, “the hit will be grave.” Never a publication to mince words, the Global Times added: “Japan’s loss will sharply outweigh its gain if it ties itself on the US’ anti-China chariot and sows discord across the Taiwan Straits.”

After the 1969 summit, the CCP—this time in the New China News Agency—warned Japan that the joint statement meant Japan was “tie[d]…even more tightly to the U.S. war chariot, pushing Japan onto the dangerous path of aggression and war.” The rhetoric—chariots and all—remains unchanged, and so does the futile bluster. After the Biden-Suga summit referenced “Taiwan,” the Global Times’ response was more blasé than bombastic. The newspaper only expressed “strong concern and firm opposition.” No “grave” hit happened. Rightfully so. Antagonizing Japan only disrupts China’s “marathon” plan to peacefully become the Indo-Pacific hegemon.

Biden-Suga summit debriefs documented minimal discussion of Taiwan. This is disappointing. Conversation begets action. If Japan wants to work with the United States to maintain Indo-Pacific security, the nation’s leadership should acknowledge, accept, and determine the active role Japan will play in a cross-Strait crisis. Once they do so, the Japanese can cooperate with the United States to protect Taiwan and deter China in eight ways.

First, Suga and his military staff should participate in more military planning conversations with Washington to prepare for a Taiwan crisis. Second, Tokyo should follow Washington’s lead and relax restrictions for diplomatic contacts with Taiwanese officials. Third, Washington should invite Japan to join the “Five Eyes” intelligence alliance. Fourth, both countries should collaborate to improve allied anti-access/area denial (A2/AD) capabilities in East Asia by developing more advanced long-range anti-ship cruise missiles and land-based missile defense batteries. Fifth, the two allies should begin consultations for a U.S.-Japan military tripwire force to deter Chinese aggression toward China. Sixth, the two countries should develop an order of battle in the event of a Taiwan Strait crisis.

Seventh, the United States and Japan should shield the Taiwanese military from diminishing force readiness and strength after repeated Chinese ADIZ intrusions demand the Taiwanese air force to scramble its fighter jets. The two countries’ militaries can help Taiwan by expanding intelligence-sharing efforts with neighboring Asian allies to warn Taiwan of incoming ADIZ intrusions ahead of time. The countries can also establish multilateral guidelines for responding to ADIZ intrusions and when to authorize escort operations or interceptions, and when to not. According to former Pacific Command (PACOM) Commander Admiral Dennis Blair, this strategy would be “unpredictable, not revealing [Taiwan’s] full capabilities but demonstrating that they are closely following Chinese activity and can intercept if they choose to do so.” Selective engagement would also delay Taiwan’s fighter force erosion.

Finally, both countries should shift their policy stance from strategic ambiguity to strategic clarity—vowing to defend Taiwan and protect its sovereignty just as their former leaders promised in 1969.

Relations with China Are a-Changin'

Seven years ago, U.S. president Barack Obama sat down with Japanese premier Shinzo Abe in Tokyo to discuss world affairs. Their post-summit statement reaffirmed their mutual “interest in building a productive and constructive relationship with China.” The Biden-Suga statement no longer reflects that former air of amicability with Beijing; their nations’ policies should not reflect it either.

The views expressed in this article are those of the author and do not reflect the official policy or position of the U.S. Navy, the U.S. Department of Defense or the U.S. government.