Is Biden Upholding Democracy or Stoking Tensions in Africa? 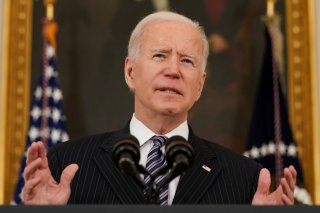 President Joe Biden’s early pronouncement that “diplomacy is back” notwithstanding, the methods—if not the tone—employed by key members of the administration’s foreign policy team have thus far proven remarkably consistent with those of the forty-fifth president.

Four months into his first term, sanctions—coupled with tough talk—remain Biden’s preferred sources of leverage against rogue regimes and actors deemed to be undermining U.S. interests.

Just last month, new restrictions were imposed by U.S. authorities on China, Burma, and Russia. A lesser admonishment—visa restrictions banning travel—were leveled at Ugandans deemed complicit in undermining recent elections for control of the State House in Entebbe, with the latent threat of more to come.

Prepared to write a new chapter following the turbulent presidency of Donald Trump, the Biden White House claims human rights are once again the focus of State Department actions.

And it follows that U.S. Secretary of State Antony Blinken would be concerned by actions taken by individuals determined to have engaged in intimidation or the targeting of Uganda’s electoral institutions in the lead up to January’s general election.

But does the blacklisting of unnamed individuals responsible for alleged infractions related to election integrity help to reassert U.S. leadership on the African continent?

Or does it smack of hypocrisy against the backdrop of America’s own failings in the same regard?

Far from enhancing democracy in Uganda, the imposition of fresh sanctions may be undermining Ugandans’ confidence in the democratic process and unnecessarily stirring tensions in the post-election period.

There is no doubt that Uganda’s latest presidential contest was particularly fractious. Long-time incumbent Yoweri Museveni turned out to be the victor.  However, his challenger, former Afrobeat artist Bobi Wine, rejected the result—a common occurrence on the African continent—as fraudulent.

That an election would foster competition, animosities, and claims of interference is hardly unique.

But Blinken’s opaque post-election statements have done little to promote stability or human rights, nor have they done anything to ameliorate the anger and cynicism harbored by some Ugandans still reeling from electoral defeat.

By identifying unnamed individuals as “responsible for, or complicit in, undermining the democratic process in Uganda, including during the country’s January 14 general elections and the campaign period that preceded it,” Blinken has emboldened Museveni’s opposition, in lieu of evidence, to maintain or substantiate their positions.

The State Department hasn’t actually claimed the election was fraudulent, but states there were problems—which there clearly were—and that the electoral process itself was undermined. The inherent ambiguity of these statements has regrettably been seized by oppositionists claiming U.S. support—though it is not clear any such support actually exists.

Despite the vote’s shortcomings, which no election the world over is free from, the assertion that the contest was stolen is as frivolous as it is incorrect. To overturn an election, fraud must be substantial and of a magnitude that is outcome-determinative. With the numbers in the Ugandan case, this seems scarcely possible.

Over 10 million Ugandans turned out to cast their vote on January 14. Of those, Museveni garnered over 6 million, with Bobi Wine gaining just over 3.6 million. This means that more than 2.4 million votes would need to be fraudulent to overturn the results—a margin that stretches the bounds of credulity.

Charity Ahimbisibwe, the national coordinator of Citizen’s Coalition for Electoral Democracy in Uganda, an observer group, stated that despite serious shortcomings in the pre-voting period, they saw little evidence of rigging on election day.

Bobi Wine did take to the courts claiming his team had uncovered “glaring evidence” of election misconduct, but he promptly withdrew his petition rather than face full disclosure in a court of law. That the evidence needed to invalidate the win included votes taken from over 34,000 polling stations may have been the motivation Wine needed to back down.

Despite Ugandan courts often ruling in his favor, Wine has since taken his case to the court of public opinion—though he has yet to furnish credible evidence to corroborate his claims.

To be clear, the Ugandan election’s shortcomings are evident.  Even with security services’ obligations to restrict gatherings to less than 200 people due to Covid-19, their activities in the pre-election period were often heavy-handed and sometimes brutally violent.

But when it comes to an otherwise reliable global partner, with a reputation for “promoting stability in the Horn and East/Central Africa and in combating terror,” the answer to such deficiencies is capacity-building to establish rights-based training and the professionalization of Uganda’s domestic security apparatus. Assistance, not punishment, is the most appropriate means of amplifying U.S. leadership and strengthening bilateral relations with an important ally on the African continent.

The answer is that Biden believed that such an effort would only exacerbate domestic polarization, stoke tensions, distract from the Covid-19 recovery, and prevent the nation from moving on after a fiercely contested election season.

Many in Uganda believe the same. U.S. actions are serving the opposite ends.