Biden's EIKO Sanctions Concession Is a Gift to the Ayatollahs 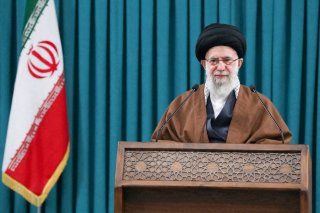 Upon taking office, the Biden administration committed to “putting human rights at the center of U.S. foreign policy” and defined “combatting corruption as a core U.S. national security interest.” Yet, as part of its impending deal with Iran, the administration will lift sanctions on Supreme Leader Ali Khamenei and his $100 billion corporate empire-cum-slush fund known as EIKO, which stands for Execution of Imam Khomeini’s Order. Thanks to the extraordinary power it wields as Khamenei’s economic arm, EIKO is essentially an extortion racket that has seized a dominant position in Iran’s economy through corruption, arbitrary confiscation of private property, denial of due process, and preferential access to investment and bidding contracts. Under Khamenei’s direct control, EIKO is also tax-exempt and completely opaque. It enables him to fund every pet project he wishes and shake down ordinary Iranians to replenish its coffers.

Lifting sanctions on EIKO does not advance Joe Biden’s purported goal of a nuclear détente with Tehran. The move would simply be a payoff to the supreme leader to secure his approval of a new nuclear deal.

The Obama administration sanctioned EIKO in June 2013, along with thirty-seven subsidiaries in Iran and overseas, which the Treasury Department’s top counterterrorism official described as “a shadowy network of off-the-books front companies” whose job is to “hide billions of dollars of corporate profits at the expense of the Iranian people.” Nonetheless, as part of the 2015 nuclear deal, formally known as the Joint Comprehensive Plan of Action (JCPOA), the United States delisted EIKO. Then, as now, the move had nothing to do with nuclear issues. It was a reward for the supreme leader.

EIKO is an immense conglomerate that a 2013 Reuters investigation valued at almost $100 billion. More than half of this wealth, by Reuters’ estimates, consists of real estate often acquired illegally through arbitrary confiscation and judicial arm twisting at the expense of dissidents, religious minorities like the Baha’is, and Iranians residing abroad. Given that Reuters’ assessment drew from land, real estate, and stock exchange values as old as 2008, EIKO may be worth much more once sanctions are lifted and, more importantly, will generate significantly more revenue than it already does.

As my colleagues Behnam Ben Taleblu and Saeed Ghasseminejad noted in 2017, “EIKO has become a vehicle for Khamenei to receive huge sums of money without any oversight, solidifying his grip on the country’s byzantine power structure atop which he sits.” This corruption, at the height of the COVID-19 pandemic, was responsible for delays in the acquisition and distribution of life-saving personal protection equipment (PPE) for Iran’s civilian population. EIKO was also reportedly hoarding PPE to profit from its citizens’ misery.

EIKO’s companies occupy virtually every sector of Iran’s economy, ranging from real estate and energy to wealth management funds, insurance, and pharmaceuticals, making it a formidable competitor for foreign bids and contracts. Foreign companies returning to Iran’s market will soon discover that their business ventures all have the supreme leader as a silent partner; their investments will have to compromise with the corruption he supervises. And the revenue they generate may end up facilitating the covert advancement of nuclear weapons.

As the Treasury Department made clear in its 2013 sanctions announcement, EIKO was engaged in “assisting the Iranian government’s circumvention of U.S. and international sanctions.” The announcement followed the revelation in April 2013 that EIKO controlled factories in Europe that gave Iran access to sensitive dual-use nuclear technology.

Sanctions relief for EIKO, and for all its previously sanctioned subsidiaries and officials, will also increase the supreme leader’s access to discretionary funds used to support terrorism and spread Iranian propaganda.

As my colleagues Eric Lorber and Matthew Zweig noted in 2019, the executive order under which EIKO is currently sanctioned (E.O. 13876) has nothing to do with nuclear issues. The order targets “actions of the Government of Iran and Iranian-backed proxies, particularly those taken to destabilize the Middle East, promote international terrorism, and advance Iran’s ballistic missile program, and Iran’s irresponsible and provocative actions in and over international waters, including the targeting of United States military assets and civilian vessels.”

Removing EIKO from the sanctions list on the pretext of nuclear détente follows no clear logic. At least in theory, the impending deal will impose meaningful restraints on Iran’s nuclear program, thus removing the need to sanction its components. But the deal will have no provision to restrain corruption or judicial abuse. On the contrary, EIKO will be able to act with impunity abroad much like it already does at home.

The new Iran deal will make EIKO—a lead culprit in the clerical regime’s corruption, plunder of state resources, human rights abuses, terrorism, and regional adventurism—much richer than ever before. This is Biden’s gift to the ayatollahs. It is the price of negotiations built around the hope that Tehran will be grateful for Biden’s commitment to diplomacy rather than eager to exploit it to the hilt.

Emanuele Ottolenghi is a Senior Fellow at the Foundation for Defense of Democracies, a non-partisan research institute in Washington DC focusing on national security and foreign policy. Follow him on Twitter @eottolenghi.