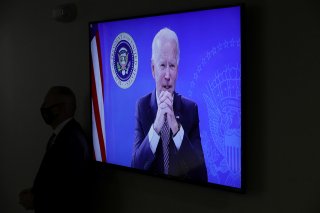 When Joe Biden promised to unite America and bring it “back,” many assumed that would mean little more than a return to the sleepy-eyed consensus of corporate cronyism, pre-Trump Twitter, and Substacks waxing poetic about infusing tax cuts with the wisdom of Hegelian economics.

Unfortunately for America, especially our brave men and women in uniform, the Biden administration’s conception of “normalcy” seems to constitute our elite’s sick and disastrous fondness for endless wars in far-flung nations.

Late last night, President Biden approved the use of seven 500lb precision bombs on various targets in Syria, reportedly strongholds of military groups sponsored by Iran. Pentagon spokesman John Kirby attempted to justify the strike, saying, “These strikes were authorized in response to recent attacks against American and Coalition personnel in Iraq, and to ongoing threats to those personnel.”

Certainly, blatant, state-sponsored attacks against Americans—especially against those in our Armed Forces—should be met with swift and forceful action. But this affront must not distract us from asking why our men and women in uniform are still in Iraq. Eighteen years later, most Americans believe that Iraq is a completely lost cause. Our last president certainly felt that way. He was convinced that nearly 5,000 American fatalities and a $2 trillion military campaign was far too high a cost.

But perhaps not President Joe Biden. The technocrats, lobbyists, and think tank neoconservatives who comprise the military-industrial complex are raring to hop back into the cockpit. It had grown so fearful of withdrawal from the Middle East that our nation’s top envoy to the multinational coalition to defeat ISIS stooped to lying to President Donald Trump about American troop levels in Syria. To be sure, the most shell-shocked that the corporate boardrooms of Raytheon, Northrup Grumman, and Lockheed Martin had been for a very long time was on November 8, 2016, when Trump—very much a foreign policy realist—won the election. In the four years that followed, President Trump became the first Commander-in-Chief since Jimmy Carter to not start a new war.

President Trump had a different vision for America, the focus of which was on everyday Americans and advancing our national interest—and not that of foreign powers, nor the interests of private corporate entities. In a press conference a little under a month into his presidency, he blasted foreign adventurism, saying, “We have to have a strong law enforcement also. So we do not go abroad in search of war, we really are searching for peace, but its peace through strength.” For a man who, at least according to the Left, was entirely ignorant of history and morally obstruse, he came awfully close to echoing the wisdom of John Quincy Adams, who in 1821, noted that America “is the well-wisher to the freedom and independence of all,” but warned that she should not go “abroad, in search of monsters to destroy.”

Trump’s words—and his actions, no less—already stand in stark contrast to the new administration, which, instead of immediately removing our soldiers from harm’s way in Iraq, appears to be doubling down on reckless adventurism, futile nation-building, and foolish international policing.

What’s the game plan in Iraq now? Actually, what has it ever been? The U.S. military has occupied Iraq for half a decade longer than I myself have been alive, and it seems no less of a mess today than it was decades ago. One of the most important things I’ve learned from running a company and non-profits, as well as from working under great leaders, is a willingness to admit failure. Only then is it possible to pivot to a winning strategy.

A true “Uniter-in-Chief” would bring our soldiers in Iraq home to their families and communities. At the very least, a sensible Uniter-in-Chief would follow the lead of the American people who are unmistakably united against continued involvement in Iraq. And while the hyper-partisan nature of American politics possesses the incredible ability to flip attitudes overnight, President Biden ought to discover that war in the Middle East will remain a losing issue, politically and literally.

Nick Solheim is Co-Founder of American Moment, an organization dedicated to identifying, educating, and credentialing young Americans who will implement public policy that supports strong families, a sovereign nation, and prosperity for all.