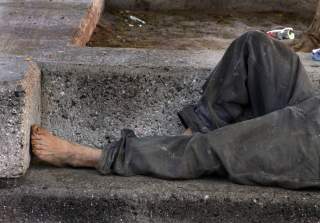 The recent experience of a homeless shelter in Frankfort, Kentucky highlights how community values and on-the-ground experience are sometimes a better guide for serving those in need than policy directives from Washington, DC — even those informed by good intentions and research on apparent best practices.

The Franklin County Women and Family Shelter (FCWFS) is one of several homeless shelters in Frankfort. Opened a decade ago to address rising homelessness driven in part by opioid and meth epidemics that have devastated many parts of the state, it operates on a shoestring annual budget of $200,000 while helping very low-income women, often with serious substance use disorders, get off the streets and back on their feet. Last year, its staff — a part-time director, one full-time case manager and a two part-time workers and volunteers — provided shelter to 93 people, including 73 adults and 20 children.

To be eligible for shelter, adults are expected to work or participate in services to the degree they can. Drug treatment is generally available in the area, and the shelter maintains a zero tolerance policy for substance use. Typical stays average about ten weeks and include intensive case management to address issues causing the homelessness. This is followed by help in finding an apartment or another permanent living option. Participants are then eligible for “rental assistance, services, and support for at least eight months after a woman or family with children leaves the program.”

However, because of federal rules, one current resident of the shelter — let’s call her Rosie to protect her privacy — could well lose all hope for a good future. Rosie has spent much of her adult life using drugs on the streets. The daughter of a single mother also an addict, Rosie began using at age 15. Evicted by her sister when she refused to enable her substance use, Rosie turned to FCWFS for help. On a recent visit, Rosie had been clean for over two months (what she calls “getting away from the madness”).

But now, despite all the good work FCWFS does in helping women like Rosie, federal funding rules are working against the shelter and other similar “transitional shelter” providers. That’s because the current “Housing First” model backed by the US Department of Housing and Urban Development (HUD) prohibits shelters like FCWFS from requiring residents to participate in drug treatment, job search, or even daily chores as a condition of shelter. (In lieu of residents doing chores, HUD suggested FCWFS “hire a maid.”) Ignoring these rules means loss of federal funds, and FCWFS already has been forced to turn down $70,000 in federal grants, representing 35 percent of their annual budget.

That lost funding could be the difference between the shelter staying open or closing its doors. FCWFS is not alone. Nationally, “the [federal] government has slowly defunded transitional shelters in support of building more permanent low-income housing. Because of this change in funding policy, transitional shelters are being shut down or exist with poorly maintained facilities and little to no resources.”

HUD’s current priority on more permanent housing carried over from the Bush into the Obama and Trump administrations. That is despite the current administration’s most recent budget plan calling for “tenant work and self-sufficiency” as part of its broader efforts to ensure recipients of various benefits are engaged in work or productive activities.  Yet a recent report from the Council of Economic Advisors cast doubt on the effectiveness of Housing First. It notes that “For outcomes such as impacts on substance abuse and mental illness, Housing First in general performs no better than other approaches … It tends to cost more as well.”

Ironically, FCWFS administrators — who describe themselves as “mostly liberals” — pursue their own version of the administration’s “tenant work and self-sufficiency” approach.  They do so without prodding from the federal government, because the shelter staff and community backers believe it helps the residents. It’s working, they say — a view shared by Rosie.

Yet the immediate future of Rosie and her peers on Frankfort’s streets is now more uncertain because of this national policy. That presents tough questions: Whose requirements are more important? Federal ones ending funding for FCWFS and similar shelters? Or the ones practiced at shelters like FCWFS and followed by Rosie to be able to stay there? Who is in a better position to make the right decision? Bureaucrats and lawmakers in Washington? Or shelter staff sitting at kitchen tables with women like Rosie in Frankfort and elsewhere? And how will this debate end for Rosie and others like her, who believe the help they are getting is their best hope for securing a better future?

This piece by Matt Weidinger appeared at AEI on December 17, 2019.