The Big Guns are Here: Russia is Bringing Back Its Cold War "God of War" Heavy Artillery 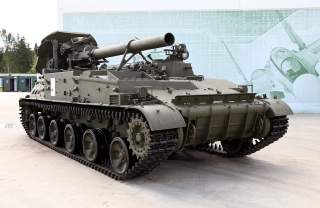 Russia's "God of War" is coming back with a vengeance.

The Soviet Union had a plethora of heavy artillery that could shoot nuclear and conventional shells, a fact that NATO would have learned the hard way had the Cold War turned hot. But with the collapse of the Soviet Union, the Red Army's big guns were mothballed to storage depots.

Yet with temperatures rising between Russia and the West today, the heavy artillery is being dusted off and modernized, including the 2S4 Tyulpan 240-millimeter mortar and the 2S7 Pion 203-millimeter howitzer, according to the U.S. Army's Foreign Military Studies Office.

"After the end of the Cold War, the Russian Federation placed most of these large caliber artillery systems into long-term storage depots for several reasons," explains the September issue of OE Watch, FMSO's magazine. The end of the Cold War ended the need for weapons that could shoot long-range tactical nuclear warheads, while new ballistic and cruise missiles, multiple rocket launchers, and howitzers like the 152-millimeter 2S19 Msta could fulfill the same missions as heavy artillery.

But Russia is now refurbishing these older weapons for the modern battlefield. "The 2S4 is reportedly being upgraded to interface with modern Russian artillery command and control systems, to include improved communication and fire control systems," FMSO notes."In addition, barrels and recoil mechanisms are being refurbished or replaced." The resurrected weapons are equipping the 45th Artillery Brigade -- Russia's only independent heavy artillery brigade -- as well as artillery brigades attached to armies and possibly corps. The big guns are normally organized into battalions of 8 to 12 tubes.

But this doesn't answer the question: Why is Russia bringing back old guns? Even the U.S. Army's analysts can't figure that one out. "Interestingly, although there has been much discussion about the capabilities of large caliber artillery pieces, there has not been a mention of why they are being returned to service," FMSO says. "Since there is little need for a tube-based nuclear artillery delivery system, and there are efforts to equip the systems with laser-guided munitions, it is likely that these systems are envisaged to pulverize urban areas and field fortifications, tasks which are difficult for standard Russian 122mm and 152mm artillery pieces."

In other words, even in the smart bomb area, the big but clumsy guns have their uses. Historically, armies without heavy artillery could find themselves helpless when confronted by fortifications. The Germans relied on siege artillery to quickly destroy Belgian fortresses in 1914, and again on weapons such as the 600-millimeter "Karl" mortar, to capture the Soviet fortress of Sevastopol in 1942. The U.S. found its 203-millimeter and 240-millimeter howitzers to be extremely useful in destroying German fortifications in Europe in 1944-1945.

FMSO also suggests another reason for the Russian big gun renaissance, and it is one that should also give American planners food for thought. High-tech weapons like ballistic missiles are expensive, and available in limited quantities: at one point, the U.S. was launching so many Hellfire anti-tank missiles from aircraft and drones over Iraq and Syria that the stockpile ran low. Could this be Russia's motivation? "Russia’s industrial base and financial resources to rapidly replenish sophisticated and expensive missiles at a level needed for large scale war may be in question (the production of 2S4 and 2S7 shells is much faster and cheaper than the production of any missile)," FMSO speculates. "In short, new missile artillery systems may be better, but the 2S4 and 2S7 give Russian planners a more sustainable and economical way of conducting heavy fires, and their use would allow the missile artillery to focus upon more specialized targets."