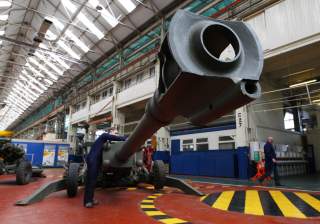 Key point: London is wary of Moscow's increasing power. But will the United Kingdom come up with new artillery that are good enough?

The British Army doesn’t have enough artillery to win in battle with Russian forces, a U.K. think tank claimed. And the artillery the army does have lacks range and mobility.

“The U.K.’s ground forces are comprehensively outgunned and outranged, leaving enemy artillery free to prosecute fire missions with impunity,” the Royal United Services Institute argued in a November 2019 report. “This must ultimately lead to the defeat of U.K. units.”

As recently as the 1990s the British Army possessed world-class artillery in sufficient numbers. But owing to decades of budget-driven cutbacks, the army in 2019 operates only older artillery systems, and too few of them.

Today to support a force of 113,000 active and reserve soldiers, down from 142,000 in 2010, the British Army fields one regiment of Multiple Rocket Launch Systems, three regiments of AS90 155-millimeter self-propelled howitzers and four regiments of L118 105-millimeter guns. A regiment possesses around 30 launchers or guns.

Combined, the eight artillery regiments operate around 240 guns and launchers to support five combat brigades. By contrast, a Russian motor-rifle brigade possesses 81 guns, according to RUSI.

The farthest-firing British artillery system, the MLRS, has a range of 50 miles. Equivalent Russian rocket launchers can fire 75 miles. The British rockets are GPS-guided and thus vulnerable to Russian jamming, RUSI warned. “Without appropriate munitions, British forces will simply be out-ranged, out-gunned and thereby defeated in detail.”

Equally troubling, British artillery would struggle to reach a European battlefield in time to engage Russian invaders. “During the Cold War, when British armor was based in Germany, the prospective front line was comparatively close to the barracks, with all necessary combat service support on hand to get the tanks into combat,” RUSI explained in a separate 2019 report. “Today, an escalation on NATO’s eastern border would take place [1,200 miles] away.”

The British Army has contracted with American company KBR for the use of 92 Heavy Equipment Transporters, in essence very powerful flatbed trucks for hauling armored vehicles.

But those HETs also transport the army’s 227 Challenger 2 tanks as well as its thousands of other armored vehicles. “Current projections suggest a 60-day deployment period for Britain’s heavy forces,” RUSI estimated.

The army “would likely need to forward-base these units in, say, Poland if they are to be closer to where they may see action,” RUSI advised. “The problem is that doing these things is exceedingly expensive.”

Funding has stabilized at around $55 billion annually. In 2017 and 2018, the government allocated the armed forces an extra $2 billion, combined, above planned spending levels, enough to employ 196,000 active and reserve sailors, soldiers, airmen and civilian personnel.

The U.K. Defense Ministry objected to RUSI’s criticism. “The U.K. does not stand alone but alongside its NATO allies, who work closely together across air, sea, land, nuclear and cyber to deter threats and respond to crises,” the ministry stated.

“The modernization of artillery therefore must be a priority for the British Army,” RUSI warned.

The Ministry of Defense has taken an initial step toward replacing the AS90s with a more modern howitzer. The ministry in April 2019 released an initial request for information for a new 155-millimeter self-propelled gun for service starting in 2026.

The new gun should fire farther than the AS90 does and be more mobile, according to the RFI.