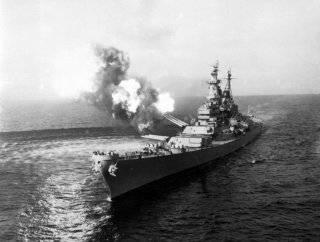 Here's what you need to know: Today you can see the USS Missouri during her close-up on-screen or docked at Pearl Harbor.

The United States Navy retired its four Iowa-class battleships some thirty years ago, and one of the battlewagons, USS Missouri (BB-63), was given a big-screen sendoff when she appeared in the 1992 film Under Siege starring martial arts action star Steven Segal.

All four of the warships, which were constructed during the Second World War as a new class of "fast battleship," had been in a mothballed state since the Vietnam War era. However, in the 1980s, after President Ronald Reagan called for a 600-ship U.S. Navy, USS Iowa (BB-61) and her three sister battleships were reactivated and upgraded with new combat systems to address the threats of the Cold War. Many of the ships' smaller five-inch guns were replaced with launchers for Harpoon anti-ship missiles, and notably Tomahawk cruise missiles. Additionally, the ships each received four Phalanx close-in weapon systems (CIWS).

The Tomahawk cruise missiles were a critical part of the film Under Siege, where high trained international terrorists, lead by a rogue CIA operative (Tommy Lee Jones), successfully "hi-jack" the battleship. Essentially a "Die Hard at Sea" story, the terrorists seek to seal the Tomahawks and sell them on the black market.

Of course today, the best thing any would-be thieves might acquire would be some toys or books from the gift shop. That is because Missouri, and the other three Iowa-class battleships, are all museum ships now. That might have made it easier to make the film.

Because Missouri was still only in the process of being deactivated and converted to a museum when the film was being made, U.S. Navy stock footage of the Missouri and her sisters were used for many of the establishing shots, including those on the high seas.

As a result, the battleship didn't actually get its close-up in the film. The production actually headed not to the Pacific Ocean, but instead to Mobile Bay, Alabama to the Battleship Memorial Park. That was the home of the South Dakota-class battleship USS Alabama (BB-60), which stood in for Missouri, while the Gato­-class submarine USS Drum (SS-228), stood in for the "North Korean" submarine.

It wasn't the first time Alabama helped out the Iowa-class. When the latter warships were reactivated in the 1980s, parts were cannibalized from the Alabama as well as from other preserved battleships including USS Massachusetts (BB-59) and USS North Carolina (BB-55). That included engine room components, which were no longer in the Navy's inventory of material.

USS Alabama headed to sea again on the big screen – albeit while not leaving Mobile Bay – when she stood in for the Portland-class heavy cruiser USS Indianapolis (CL/CA-35) in the 2016 film USS Indianapolis: Men of Courage.