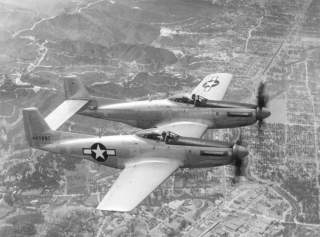 Key point: The F-82 continued to fight on in the conflict until 1952, when the final Twin Mustang was sent out for rear-guard duty in Alaska.

At some point during the tail end of World War II, a creative engineer at North American Aviation looked at the P-51 Mustang and wrote a memo to his boss stating that if one Mustang was amazing, then two Mustangs merged together by steel and rivets would be possibly the greatest thing to fly, ever. With one cockpit devoted to radar and the other to flying, the F-82 Twin Mustang — nicknamed “double trouble” — was born. What they didn't know was that the Twin Mustang was destined to cement it's place in history over the skies of Korea.

The F-82 was an aircraft born in the wrong era. The German fielding of the Messerschmitt ME-262 at the Second World War’s close signaled the dawn of the jet-powered fighter. As the Korean War started, Air Force jets like the F-80 were replacing the F-51D Mustangs and F-82s that had become the core of the Air Force fleet. But there were still three squadrons of F-82s stationed in Japan. Their radar-housing double fuselage gave the 5th Air Force an all-weather capability that would come in handy as the cold war turned hot.

On June 27th, 1950, five F-82s were performing a high-stakes escort mission for Air Force transports evacuating civilians out of Seoul. The North Korean Army had barrelled across the border on the 25th and put the city in its crosshairs. Although the U.S.-aligned South Koreans had fighting spirit, they lacked tanks and air support, which the North had in abundance. It was rapidly apparent to the United States that Seoul would fall, and fall fast. Evacuations began by sea and air, with F-82s providing protection.

A flight of Soviet-built Yak-11s and La-7s appeared near Kimpo Airfield to intercept the evacuating transports. Lt. William G Hudson and his radar operator Lt. Carl Fraser jumped into the furball, shooting down a Yak-11 and cementing their F-82 as the first American aircraft to get an air-to-air victory in Korea.

The F-82 continued to fight on in the conflict until 1952, when the final Twin Mustang was sent out for rear-guard duty in Alaska. The introduction of advanced jet fighters like the MiG-15 signaled the end of the prop fighter era, and the skies over Korea were soon filled with F-86 Sabers and MiG-15s engaged in a deadly ballet of atomic age acrobatics. But by then, the F-82 Twin Mustang had already cemented its place in Air Force history on that day over Seoul.