Bleak Forecast: The Economy in Canada May Take 2 Years to Recover From Coronavirus 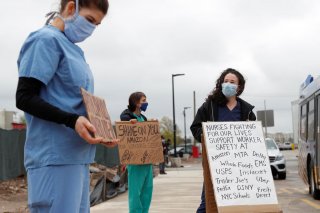 Predictions about the effects of the coronavirus pandemic on the world’s economy arrive almost daily. How can we make sense of them in the midst of this economic storm? After all, research shows that economic forecasts made during events such as SARS are often wildly inaccurate.

To calibrate current forecasts — such as the International Monetary Fund’s prediction of a 6.2 per cent decline in Gross Domestic Product for Canada — I’ve looked at the history of similar worldwide economic shocks, studied macroeconomics models and reviewed nearly 75 studies to better understand what might happen in a post-pandemic world.

The influenza outbreak of 1918-20 killed at least 40 million people, or approximately two per cent of the world’s population. In Canada alone, at least 50,000 deaths were attributed to the flu, approaching the number of Canadian deaths in the First World War. Solid data about GDP did not exist for that era, so economic historians have to recreate economic measurements based on the data that was collected.

The most thorough study focuses on how the influenza pandemic 100 years ago affected Sweden. The Swedish study took advantage of the fact that the country kept very detailed data on causes of death, as well as having a history of accurate economic record-keeping dating back to the 1800s.

Sweden was a neutral country in the First World War, so unlike other Western nations, the war had limited impact on the country’s economy. The fatality rate from the flu in Sweden was comparable to most Western nations and its economy was similar to other developed countries.

The study of Sweden’s flu experience a century ago suggests there could be permanent negative long-term economic effects from the current pandemic. There was a decline in income from capital sources such as interest, dividends and rents of five per cent that lasted at least until 1929. This was a permanent decline not recovered once the flu pandemic passed.

There was also an increase in absolute poverty for those Swedes at the bottom of the economic pyramid: enrolment in government-run “poorhouses” in higher flu-incidence regions jumped 11 per cent and did not decline over the next decade. There was some good news: while employment income was reduced during the crisis, it quickly rebounded to predicted normal levels.

A recent study attempts to measure the effects of the influenza on 1918-21 GDP. Harvard economist Robert Barro and his colleagues painstakingly put together a set of economic data that attempts to recreate what GDP in 42 countries would have been.

They have found that the flu was responsible for an additional six per cent decline in global GDP. The study concludes that the effects were reversed by 1921. This estimate of the flu’s historical GDP effects is strikingly similar to the IMF’s current prediction of six per cent reduction in GDP for Western economies as a result of the coronavirus pandemic.

Modelling economic effects of a pandemic

Beyond economic history, we can look at macroeconomic models of the global, regional or national economies that run scenarios about pandemic economic shocks.

One scenario by British economists and health science academics is particularly apt in light of COVID-19.

Their scenario models virus incidence and fatality rates close to the current best estimates and includes strong and early social distancing measures such as school closures and work-from-home arrangements that we see today in many countries fighting the pandemic.

There is no doubt that COVID-19 is a major shock to the global economy. Across all the studies I reviewed, the conclusion of a significant decline in GDP in the order of 4.5 to six per cent with full recovery within two years seems to be well justified.

The economic history of the influenza pandemic 100 years ago suggests early easing of social distancing measures and the inability to develop an effective vaccine contributed to second and third flu waves. These waves might have greater effects on the modern service-based economy of Western nations than they did on the more agrarian economy of 100 years ago.

Economic history serves as a potential warning that the economy could get much worse if these measures are ignored.

It’s important to remember that GDP is a marker of a nation’s overall economic health. On an individual level, the effects may be more far-reaching and painful. There are financial and professional losses that may never be recovered.

The 1918-20 flu offers an important history lesson for the world’s current economic outlook: there may be significant declines in the returns to capital in the next decade, as well as relative increases in poverty for the neediest in our society.