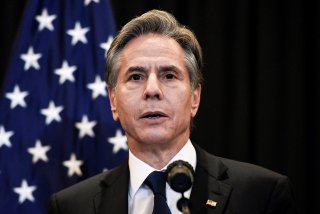 On his tour of southeast Asia, Secretary of State Antony Blinken visited Indonesia on Monday, where he met President Joko Widodo and Foreign Minister Retno Marsudi in Jakarta, the country’s capital.

In his meeting with Widodo, who is commonly known as “Jokowi” within Indonesia, Blinken argued that the United States and Indonesia enjoyed a “strategic partnership.” The secretary praised Jokowi, making special reference to Indonesia’s status as “the world’s third-largest democracy and a strong proponent of the rules-based international order.” Earlier in the week, representatives from Indonesia had attended President Joe Biden’s two-day Summit for Democracy,” at which he praised democratic nations and urged them to find common ground amid a global decline in the number of fully democratic nations.

Blinken praised Indonesian leadership in Southeast Asia and the Pacific region and expressed interest in deepening relations between the two countries. Marsudi noted that a potential area for cooperation was in supplying Indonesia’s growing need for infrastructure, demand for which has dramatically increased as the country’s middle class has expanded.

Blinken also gave a speech in Jakarta on Tuesday morning, outlining the Biden administration’s approach to relations with the Indo-Pacific nations. The speech also touched on increasing U.S. competition with China, which has also played a major role in southeastern Asian politics. In advance of the meeting, the Chinese state-run Global Times newspaper claimed that Blinken’s trip would “fail . . . to change the equilibrium” within the region, observing that small Southeast Asian countries would probably continue to balance their foreign policies to avoid total dependence on either Washington or Beijing.

Prior to Blinken’s trip, Daniel Kritenbrink, Assistant U.S. Secretary of State for East Asian and Pacific Affairs, indicated that the U.S. would attempt to deepen its involvement with the Association of Southeast Asian Nations, or ASEAN. Although U.S. ties with ASEAN have been complicated by the February 2021 coup in Myanmar, which remains a member of the bloc, Biden attended a U.S.-ASEAN virtual summit in October and indicated that Washington would strengthen its ties with the nations of Southeast Asia.

After he departs Indonesia, Blinken is scheduled to visit Malaysia and Thailand. Malaysia is considered to be a democratic country. Its officials attended Biden’s Summit for Democracy, while Thailand, although a longtime key U.S. ally, did not send a representative.