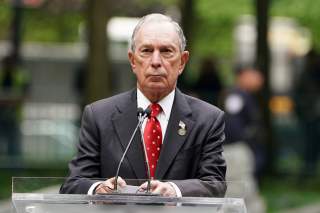 Bloomberg, 77, has been toying with the idea of joining an already-crowded Democratic field, with a report earlier in November noting he was preparing to file for a Democratic presidential primary in Alabama. The multibillionaire officially joined the race Sunday with an advertisement and the launch of his campaign website.

I believe my unique set of experiences in business, government, and philanthropy will enable me to win and lead.

The advertisement highlighted Bloomberg’s history, going back to when he was a “middle-class kid.” It also mentioned Trump, noting that the former NYC mayor will be “taking him on.”

“He could have just been the middle-class kid … but Mike Bloomberg became the guy who did good,” the advertisement said.

His website does not yet have any specific plans on what Bloomberg would do if elected president in 2020.

“Talk is cheap. As an entrepreneur, mayor, and problem-solving philanthropist, Mike has taken on the toughest challenges and gotten big things done,” the campaign website reads. “His customers and his constituents wouldn’t have accepted anything less — and neither would he. He’s a proven leader who brings people together to reach ambitious goals.”

“As president, Mike will continue putting progress ahead of partisanship — and he will unite the country around a bold and achievable agenda.”

The former mayor and businessman began to book up “massive” amounts of TV advertisements in preparation for the launch. He has bought air time in stations around the country and could spend more in one day than some presidential candidates do throughout their entire campaign, Democratic consultant pollster Fernand Amandi told Politico.

“This buy is MASSIVE,” Advertising Analytics analyst Ben Taber wrote in a previous email to Politico. “We’ve only seen a few one-off stations but it looks like the buy is going to be at least $10 [million] for one week. Possibly way more.”