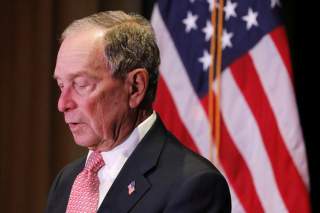 He suggested Trump’s campaign manager, Brad Parscale, is focusing only on a handful of pro-Trump states.

“That’s one of the reasons Mike got into this campaign,” Sheekey said, referring to Bloomberg’s concerns that the Democratic field is not up to the challenge of beating the president.

Part of the reason for his rising fortunes is his strategy: Bloomberg has spent nearly $250 million on advertising in the two months since he joined the Democratic race, Politico reported Sunday. Prices for political TV ads have jumped 20% since Bloomberg’s campaign began, the publication noted.

Meanwhile, Trump’s campaign is focusing much of its arsenal on Facebook and Google, with the president doling out at least $12 million on Google since May 2018, CNBC reported Jan. 16, citing data from a progressive analytics group, Acronym.