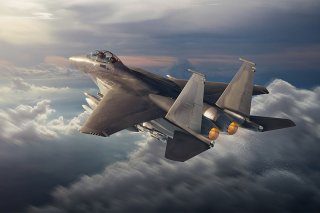 It had been 15 years since the U.S. Air Force received a new F-15 Eagle fighter from Boeing when the flying branch in mid-2019 made a surprise announcement. It would begin purchasing copies of an updated version of the twin-engine dogfighter -- the F-15EX -- in order to complement the service’s F-22 and F-35 stealth fighters.

The basic F-15 at the time was a more than 50-year-old design. It first flew in 1972. The F-15EX, however, is a new airplane that only looks like a classic F-15. The new Eagle’s guts are among the most modern of any warplane now in production.

The flying branch proposed to buy 144 F-15EXs to replace the oldest F-15C/Ds. Congress approved eight F-15EXs in the defense budget for 2020 for a total cost of around a billion dollars, including some spare parts.

While an F-15EX and an F-35 both cost around $80 million, the F-15EX purportedly is easier to integrate into the force.

“The F-15EX, USAF argues, is essentially an in-production aircraft. It has upward of 70-percent parts commonality with the F-15C and E already in USAF service and can use almost all the same ground equipment, hangars, simulators and other support gear as the Eagles now in service,” Tirpak explained.

Some retired generals objected to the F-15EX purchase, pointing out that the Eagle with its 1960s-airframe lacks stealthy features.

While the lack of stealth is a problem Boeing cannot solve, the company has been eager to point out that, under the skin, the F-15EX is a new airplane that Boeing workers assemble using the latest industrial processes.

“It’s a living, breathing, evolving platform,” Boeing vice president for F-15 programs Prat Kumar told Air & Space reporter Preston Lerner. “The most recent avatar of F-15 is nothing like what was used 45 years ago. Frankly, it’s nothing like what the Air Force bought 15 or 20 years ago. F-15EX has a fly-by-wire flight-control system and one of the fastest, most capable mission computers in the world. It has an advanced, all-glass cockpit that can display synthesized data in a way that is useful for the warfighter. It has the most advanced radar on any fighter jet, and it carries more weapons than any other fighter.”

The F-15EX’s airframe on the surface will be identical to older F-15s, but Boeing claimed it will be better-built. “The biggest challenge, as always, will be getting all the components—400,000 individual parts sourced from 400 vendors spanning the globe—to fit together seamlessly,” Lerner pointed out.

“Two years ago, Boeing started to digitize components so they could be machined by computer-numeric-controlled mills,” Lerner wrote. “The accuracy of the parts coming out of CNC machines allowed the company to start using a process called full-size determinant assembly: digitally defined holes in the parts can be aligned perfectly without being mounted in a fixture and manipulated by hand.”

“We assemble them in Lego-like fashion,” Kumar said. “This adds speed and agility to the process. It makes the airplane more affordable. It makes it more maintainable.”