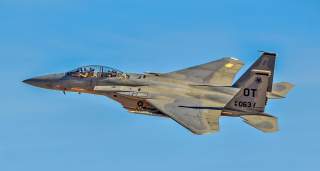 The U.S. Air Force has revealed more of its long-term plan for acquiring a new model of the venerable F-15 Eagle fighter.

In the years after 2024, the Air Force has proposed to purchase another 64 F-15EXs for a total fleet of 144 of the upgraded, twin-engine fighters. The new planes in total would cost $7.8 billion.

The likely result, by the mid-2020s, would be a mixed fleet of old and new Eagles. As of early 2019 the Air Force operated 217 F-15E Strike Eagles for air-to-ground missions and 240 F-15Cs and Ds for air-to-air missions and training.

The F-15Es mostly date from the 1990s. The F-15Cs and Ds are 1970s- and 1980s-vintage aircraft. Each has racked up more than 8,300 flight hours, on average, the Air Force stated. That's roughly double the service-life that builder McDonnell Douglas, later Boeing, designed the plane for.

The F-15Es have tougher airframes than the F-15C and Ds have. The flying branch is upgrading the Strike Eagles with new radars as part of a plan to keep the fighter-bombers in service for decades to come.

Many of the F-15Cs, however, suffer from structural fatigue that limits their top speed. "Many F-15C/Ds are beyond their service life and have serious structures risks, wire chafing issues and obsolete parts," the Air Force stated. "Readiness goals are unachievable due to continuous structural inspections, time-consuming repairs and ongoing modernization efforts."

The Air Force plans to swap out old Eagles for new ones in squadrons that already fly F-15s, thus minimizing disruption to operations. Replacing the oldest and more tired F-15Cs and Ds for combat missions could allow the healthier old Eagles to continue flying in the training role.

Converting from the F-15C/D to the F-15EX would require 18 months, Krumm said, compared to up to three years for a squadron to convert to new F-35 stealth fighters.

The F-15EX features better sensors, jammers and avionics than the F-15C and D have, but the airframes -- and thus training and support requirements -- are similar across the different models. "F-15EX logistics, maintenance and training will heavily leverage existing the F-15 infrastructure," the Air Force stated.

But upgrading an F-15C unit to the F-15EX could require some changes to the squadron's training and staffing. An F-15C is a single-seat, single-role plane. "The last gunslinger," in the parlance of one high-profile magazine feature.

The F-15EX, by contrast, is a two-seat plane. "With two seats, it will be multirole-capable and operable by one or two aircrew," according to the Air Force. Assigning a new, two-crew air-to-ground mission to the existing F-15C squadrons could require the Air Force to add aircrew to the units and alter their training and deployment profiles.

The Air Force also is considering arming the new F-15EXs with a hypersonic missile, potentially making the Eagle force the branch's first units to perform a new kind of specialist strike mission. Hypersonic missiles likely would be too big to fit inside the F-35's weapons bay.

There's precedent for transforming an old fighter design into a new, hypersonic striker. The Russian air force in 2018 organized a small contingent of modified MiG-31 interceptors and armed them with fast, long-range air-to-surface rockets for a niche strike role.

Other Eagle skeptics include retired Air Force generals who prefer for the flying branch to buy only radar-evading F-35s. The blocky F-15 lacks stealth features.

But Krumm pointed out that an F-15EX should cost around half as much to maintain as an F-35 costs. The lower sustainment cost and the ease of adding F-15EXs to the force both could be powerful arguments in favor of the acquisition -- to say nothing of the new Eagle's potential hypersonic-strike capability.

Congress must approve the Air Force's budget proposal. The F-15EX could be the subject of lively debate as lawmakers begin weighing spending options.