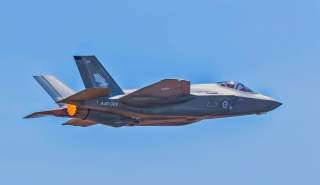 The Pentagon reportedly will request around $8 billion to buy just 78 F-35 stealth fighters in its 2020 budget proposal. That's six fewer than the military projected.

The U.S. Air Force would get all 48 F-35As it expected to buy. But even that quantity is far smaller than the 72 new fighters per years the flying branch says it must acquire in order to replace older jets before they become obsolete.

The 24-fighter shortfall is central to the ongoing debate over the U.S. Defense Department's decision essentially to force the Air Force to buy the F-15X, an upgraded version of a nearly 50-year-old fighter that Boeing last built for the Air Force in 2001.

The Pentagon’s Cost Assessment and Program Evaluation Office is the main champion of the F-15X. The office of Acting Secretary of Defense Patrick Shanahan, a former Boeing executive, was friendly to CAPE's argument that the Air Force should acquire F-15Xs alongside "fifth-generation" F-35s.

OSD inserted into the budget proposal $1.2 billion for F-15Xs. The Air Force reportedly would get eight F-15Xs in 2020 and another 72 in later years. The new F-15s would replace 35-year-old F-15Cs on a one-for-one basis in the nine squadrons operate the type -- six in the Air National Guard and three in the active force.

The Air Force is caught in the middle. As recently as September 2018, Air Force Secretary Heather Wilson rejected the idea of buying any more "fourth-generation" fighters such as the F-15.

But the Air Force needs new fighters. A lot more of them than it has bought in recent years. As of early 2019, the average age of the flying branch's approximately 1,900 fighters was 27 years.

"We want to buy 72 aircraft a year," Wilson added, according to Defense News reporter Valerie Insinna.

But officials acknowledge that the F-35 -- in particular, its basing and maintenance -- is too expensive. The high cost prevents the Air Force from reaching its longstanding goal of annually buying at least 80 F-35s.

"What’s really important for people to always takeaway is I’ve found the aircraft -- the F-35 as a product, its capability and performance -- to be eye-watering," Shanahan told Bloomberg. "It is high, high-performing -- no ambiguity -- no ifs, ands or buts."

But the military and Lockheed Martin have mismanaged the F-35 program, Shanahan said. "This is the largest program in DoD history and the cost of sustainment is about the same cost as nuclear modernization," the acting defense secretary said.

The Congressional Budget Office estimated that the F-35 program -- acquisition and sustainment -- could cost as much as $1 trillion over its roughly 50-year duration.

Buying a mix of F-15Xs and F-35s would save money, Gen. Mike Holmes, head of Air Combat Command, told reporters.

"We’re pretty confident to say that we can go cheaper getting 72 airplanes with a mix of fifth- and fourth-gen than we did if we did all fifth-gen."

The non-stealthy F-15Xs presumably would replace F-15s flying low-risk homeland-defense patrols over the United States. By contrast, F-35s with their stealth features would deploy overseas for major combat against high-tech foes.

Even so, some former generals vehemently oppose the F-15X. The Boeing fighters are "unable to survive against the threats of biggest concern in our national-defense strategy." David Deptula, a retired general and former F-15 pilot who is now the dean of the Mitchell Institute for Aerospace Studies in Virginia, wrote in a February 2019 op-ed for Forbes.

Congress could intervene to increase the number of F-35s in the budget. It also could block the request for F-15Xs, as some pro-Lockheed lawmakers have threatened to do. The fighter debate continues as the budget process grinds on.