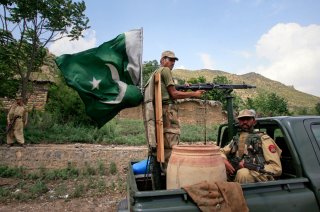 The U.S. withdrawal from Afghanistan has posed significant challenges for the United States, the Afghan Taliban government, and regular Afghans. However, the situation is also challenging for Afghanistan’s immediate neighbors, especially Pakistan, which bore the brunt of two decades of U.S.-led war in Afghanistan and is now dealing with post-war stability challenges

Pakistan faced continuing difficulties in the form of 70,000 casualties and an estimated loss of $50 billion to its economy over this period. In the aftermath of the U.S. withdrawal from Afghanistan, the countries that vowed to help Afghanistan in times of crisis—including the United States, the UK, and Germany—got caught up in Russia’s war with Ukraine. The Ukraine crisis shifted the great powers' focus to stabilizing the European continent. The conflict in Ukraine has captured international attention, reducing the urgency and significance of addressing other security-related issues in the global system. The problem for Afghanistan is that it is now a lower priority. Regional countries, mainly Pakistan, should not let their guards down on this issue. The spike in terrorist attacks inside the country is a harbinger of a growing security crisis if it is not curbed timely. Moreover, with a threatening neighbor on its eastern front, Pakistan cannot ignore the threats emanating from its western border.

The TTP in Afghanistan

The thirteenth report of the United Nations Security Council monitoring team on Afghanistan stated that the Tehreek-e-Taliban Pakistan (TTP) has remained focused on targeting Pakistan with its base in Afghanistan. It further lays down that TTP constitutes the largest component of foreign terrorist fighters in Afghanistan.

Further, according to the report of the UNSC1988 Taliban sanctions committee, the TTP ranks number up to four thousand fighters based in the East and South-East area along the Pakistani-Afghan border.

Since the fall of Kabul in August 2021, the TTP has been emboldened by the victory of the Afghan Taliban. The group has launched a series of attacks on Pakistani civilians and security forces. According to statistics by the Pakistan Institute of Peace Studies 2022, the militant group carried out nearly forty-six attacks, primarily against law enforcement personnel, in which seventy-nine people lost their lives. According to the report submitted by the Interior Ministry to the Senate of Pakistan, the country reported 434 terrorist attacks on security personnel in the first half of 2022, killing at least 323 personnel.

Khyber Pakhtunkhwa province suffered the most terrorist attacks against security personnel, with over 247 incidents occurring during the first half of the year. Meanwhile, the UN report also indicates a serious and credible threat to Pakistan’s security.

On the other hand, peace negotiations spearheaded by the Afghan Taliban to find common ground with the TTP are underway. However, two ceasefire agreements crumbled without bearing any fruitful results.

The peace talks are an initiative of the previous Pakistani government under Prime Minister Imran Khan, which the current Shahbaz Sharif administration is carrying out as a way to deal with the multiple threats. The talks are part of an overall strategy to buy time against TTP, as Pakistan is already under tremendous pressure because of the deteriorating internal political and economic situation. At the same time, the efforts by the Afghan Taliban to initiate a peace talk with TTP have been a way out of increased international pressure. Meanwhile, the Islamic State-Khorasan Province (ISKP) is on a rampage challenging the authority of the Afghan Taliban in an already volatile situation in Afghanistan.

In addition to the TTP, Baloch separatism is threatening Pakistan’s already tenuous unity and stability, along with violent insurgencies by the Islamic State affiliate ISIS-K and the resurgent Pakistani Taliban (TTP).

Since Pakistan’s founding in 1947, it has faced five insurgencies in Balochistan. 1948 witnessed the first Baloch insurgency soon after Khan of Kalat signed the instrument of accession with Pakistan. Baloch separatists also launched insurgencies in 1958, 1963, and 1970. The fifth and current one has been underway since 2003.

By 2020, years of counterinsurgency operations, rifts among separatist groups, and government incentives for the militants to lay down their weapons have significantly weakened the Baloch insurgency.

As many as five Baloch insurgent groups (BLA, BLF, BRA, UBA, and BRG) were at the forefront in claiming responsibility for different terrorist attacks reported from the province in 2021. The security situation in the province further deteriorated in 2021 as it saw a sharp rise in terrorist attacks. In 2021, there were 104 terrorist attacks reported in the province, resulting in 177 fatalities and 344 injuries. Pakistan presumes that the Afghan Taliban government is acting against such groups; however, it is still early to understand the situation fully as Afghanistan has been a battlefield for many terrorist organizations, and many cooperate on common goals.

The number of deaths from terrorism in South Asia increased by 8 percent in 2021 to 1,829. Pakistan and Afghanistan are among the ten most-affected countries due to the rising number of terrorist attacks. Pakistan has witnessed an uptick in terrorist attacks by 5 percent in 2021, whereas Afghanistan witnessed the deadliest attack since 2007 at Kabul International airport, which killed 170 individuals and injured over 200. Similarly, ISIS-K was responsible for the most casualties in Afghanistan in 2021. It has also launched thirty-two attacks against its rival, the Afghan Taliban, since they took power in August 2021.

According to an estimate, ISIS-K's strength ranges between 1,500 and 4,000 fighters concentrated in remote areas of Kunar, Nangarhar, and possibly Nuristan Province. After Islamic State’s defeat in Iraq and Syria, these fighters will likely move to Afghanistan to join ISIS-K.

The presence of ISIS-K is an issue that needs immediate attention to rescue Afghanistan from becoming a breeding ground again for global terrorist organizations.  In this regard, U.S. drone strikes, such as the recent strike in Afghanistan that killed Al-Qaeda head Ayman Al-Zawahiri can be part of the solution. However, The United States must take more actions to reduce civilian casualties. At the same time, U.S. efforts in conjunction with regional countries are the only long-term solution to address the menace of terrorism in Afghanistan.

The regional countries have taken a limited role in addressing the situation in Afghanistan. With a long history of being a victim of terrorism, Pakistan cannot bear such waves in the country anymore. Pakistan’s Financial Action Task Force (FATF) record has already proven its commitment to eliminating terrorism. The FATF has appreciated Pakistan’s efforts to strengthen its laws against terrorist financing. Though economic and political instability in the country remains, the presence of multiple threats along the Pakistani-Afghan border requires an immediate and long-term solution. Pakistan may formulate a multi-pronged strategy to counter the threat of terrorists having a strong foothold inside Afghanistan. It must engage regional countries to root out terrorism inside Afghanistan through cooperation under Shanghai Cooperation Organization (SCO). Pakistan must work with member nations to combat terrorism, separatism, and extremism under the direction of the SCO’s Regional Anti-Terrorist Structure (RATS), founded in 2001. RATS gives member states the way to set up direct security cooperation to combat terrorism. Similarly, member nations' varying degrees of counterterrorism expertise can assist in coordinating more joint counterterrorism exercises to share expertise.

Additionally, Pakistan must help strengthen the SCO-Afghan Contact Group to collaborate with Afghanistan on issues of shared concern.

Similarly, Pakistan should not allow the use of Afghanistan’s soil to harm the interests of neighboring states. Close cooperation with the Afghan Taliban and humanitarian aid organizations could bring some degree of stability, which could abate this grave threat.

Syed Ali Abbas is a researcher at the Center for International Strategic Studies, Islamabad. He is also the co-founder of Global Defense Insight, an online defence forum. He tweets @smalinaqvi05