Bombers to the Boneyard? What Will the Air Force Cut for New F-35s and B-21 Bombers? 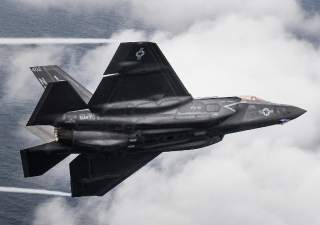 Goodbye, A-10. See you later, E-3. Nice knowing you, KC-10. These are some of the aircraft the U.S. Air Force could retire early in order to save tens of billions of dollars for new planes and technology.

At least, that’s the idea that Todd Harrison from the Center for Strategic and International Studies in Washington, D.C. floated.

Harrison’s proposal comes as the Air Force is considering aircraft divestitures in order to free up extra money for F-35 stealth fighters, B-21 stealth bombers, drones and new command-and-control systems.

“Air Force chief of staff Gen. David Goldfein recently announced that the Air Force plans to reallocate $30 billion in its budget over the next five years to invest in the capabilities it needs to implement the National Defense Strategy,”

But the $30 billion won’t be new funding, Goldfein noted. “The Air Force’s working assumption is that the budget will remain relatively flat in the future, and these new investments must be funded by making cuts to existing plans and programs,” Harrison wrote.”

To figure out what it can cut, Goldfein said Air Force “took a look at every legacy program we have and asked the question: does this contribute significantly to the 2030-to-2038 timeframe?”

Harrison’s proposal considers whole aircraft fleets the Air Force could axe in order to free up the $30 billion. The 59-strong fleet of 35-year-old KC-10 tankers could retire in 2022 instead of the previously-planned out-of-service date of 2024 and save $2 billion, Harrison estimated after consulting Air Force budget documents.

The flying branch could save nearly $3 billion by retiring its 62 B-1 bombers, which on average are 32 years old. The Air Force plans to divest the unreliable B-1s in the late 2020s. Harrison proposed eliminating them by 2022.

The 281 38-year-old A-10s could go in 2023 and save nearly $7 billion. The Air Force at present doesn’t plan on retiring the tank-killers in the foreseeable future.

The divestitures, each occurring years before new F-35s, B-21s and KC-46s are ready to replace older planes, would come with risk. “If the KC-10 retirement is accelerated before KC-46As are available to replace them on a one-for-one basis, United States Transportation Command could face a temporary shortage of tanking capacity,” Harrison wrote.

“Early retirement of the B-1B would result in a temporary reduction in the number of available bombers and strike capacity for the Air Force,” he added.

“Retiring the B-2 would leave the military without a long-range strike aircraft capable of penetrating adversary air defenses,” Harrison wrote. “It would also affect the nuclear deterrence mission because the B-2 is certified to carry nuclear weapons.”

But where else is the Air Force going to find $30 billion in its five-year budget? “For the Air Force to achieve the savings it desires, it must balance the strategic consequences of proposed cuts with the strategic value of the new investments it plans to make,” Harrison explained.

Of course, lawmakers and not the Air Force ultimately decide how much money the service gets and how it spends it. “Congress has the ultimate say in what reductions are allowed,” Harrison wrote.

“In the past, Congress has rejected many of the Air Force’s attempts to retire aircraft, such as the A-10, U-2 and RQ-4. The Air Force will need to make the case for why these aircraft are no longer needed and how the missions they support will be fulfilled by other aircraft in the inventory to avoid critical gaps in capabilities when transitioning from legacy systems to the new capabilities the Air Force is pursuing.”