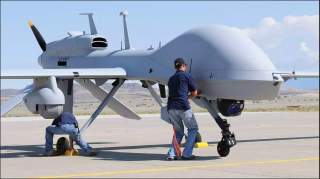 As if drones armed with Hellfire anti-tank missiles weren’t deadly enough, now drones are being armed with glide bombs.

An MQ-1C ER Gray Eagle has test-launched a small glide bomb. Like the standoff missiles on a manned aircraft, glide bombs allow the drone to launch their munitions while remaining out of range of enemy anti-aircraft defenses.

The MQ-1C ER, or extended range, is a long-range unmanned aircraft armed with Hellfire missiles. But instead of Hellfires, the Gray Eagle recently launched a GBU-69B Small Glide Munition during an August 21st demonstration.

“The demonstration was conducted at a military test range in California in collaboration with the U.S. Army and Dynetics using a GBU-69B SGM installed onto a GE-ER,” according to an announcement by Gray Eagle manufacturer General Atomics. “When launched from the GE-ER at maximum altitude, the glide weapon can reach extended ranges, which means it can effectively engage threats in a multi-domain operations environment while staying out the engagement zones of threat weapons.”

“The GE-ER operates at an altitude that provides an advantage when using stand-off munitions,” said David Alexander, president of GA Aeronautical Systems, Inc. “The reduced weight of the SGM allows the UAS to carry more munitions per aircraft. The increased standoff range of the SGM enhances Gray Eagle ER’s survivability and mission effectiveness when operating in contested airspace.”

The laser-guided GBU-69B is 42 inches long and weighs just 60 pounds, according to manufacturer Dynetics. The Small Glide Munition, with a range of 20 miles, was designed to meet U.S. Special Operations Commands requirements for a small stand-off weapon to arm AC-130 gunships and drones. It features a deployable wing, and lattice control fins for steering just like much larger glide bombs like the GBU-43/B Massive Ordnance Air Blast munition and the GBU-57A/B Massive Ordinance Penetrator.

A small, lightweight guided weapon sense for drones. Able to loiter over targets for long periods – the Gray Eagle has an endurance of 25 hours – an attack drone functions as a bomb truck. The more bombs that can be carried, the better.

Yet what’s interesting here isn’t that yet another smart bomb is being fitted to unmanned aircraft. Missile-armed drones have become ubiquitous. But glide bombs and other standoff weapons date back to World War II, as a means for bombers to launch weapon while safely staying out of range of enemy air defenses.

Drones are standoff weapons of a sort: a means to strike targets without risking the life of an operator sitting in a control room in Nevada. But the skies are becoming increasingly deadly even for drones. In June 2019, an Iranian anti-aircraft missile destroyed a U.S. Navy MQ-4C Triton, a $182 million airliner-sized drone. In addition to long-range air defense missiles like Russia’s S-400, The U.S., Russia and other nations are developing lasers designed to knock down drones.

One solution to more lethal air defenses is drone swarms, in which hordes of tiny robot aircraft overwhelm a target. But larger, more expensive unmanned aircraft like the Gray Eagle aren’t quite as expendable. Arming them with glide bombs will increase their survivability.