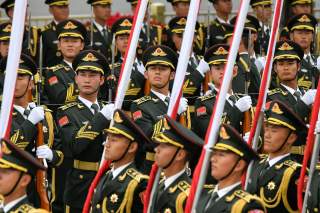 In the days before the Internet, it was difficult to find detailed, timely information on foreign armed forces. Secretive, backward China was a particularly difficult country to assess.

The Chinese War Machine changed that. The 1979 book was, for a long time, the best look at the Chinese armed forces an ordinary person could hope to get. The authors and contributors — including a youthful Bill Sweetman—hailed from highly-regarded institutions including Sandhurst, the Warship Society, the U.S. Army’s Strategic Studies Institute, the Rand Corporation and Jane’s.

By contrast, today’s Chinese armed forces wear the latest camouflage, train in high-tech simulators and sail all over the world.

In 1979, Deng Xiaoping had just risen to lead China. In coming years, he would loosen government restrictions, open up China to the rest of the world and shift his country to a market economy.

Deng’s changes would revolutionize the People’s Liberation Army. Opening up China meant regional, if not global, responsibilities. A growing market economy would generate more money for defense. Prodded—and occasionally shocked—by outside events such as the 1991 Gulf War, the once-insular Chinese military modernized.

In 1979, the ground forces of the People’s Liberation Army were the largest in the world at 3,600,000-strong. The main force consisted of 40 army corps, each with around three infantry divisions of 13,000 men apiece. There were also up to a dozen armored divisions with 30o tanks each plus three airborne divisions.

At the time, the PLA ground forces suffered from serious technological deficiencies. Infantry divisions were foot-mobile, without armored personnel carriers or even trucks to transport troops. The T-59 was the main battle tank, a derivative of the 1950s-vintage Soviet T-55 tank. The PLA relied on towed guns for anti-tank warfare and machine guns and light cannons for air defense.

The late 1970s brought rapid change. China had just ended a disastrous war with Vietnam, in which Beijing lost 300 men a day for an entire month. The war exposed serious problems—antiquated equipment and tactics, and a supply system unable to keep troops supplied just 10 miles inside Vietnam.

As The Chinese War Machine was being written, Beijing was considering a massive import of foreign weapons to rearm its ground forces. Franco-German Milan anti-tank missiles would help defeat Soviet armored spearheads the Chinese expected to enter northern Manchuria in wartime.

China was also evaluating the Anglo-American Harrier jump jet, speculating that it could operate from primitive forward airstrips in order to harass the enemy—a kind of flying guerrilla fighter, perfect for People’s War. China was even in talks to purchase the A-10 tank-killer from the U.S.

In the 1990s and 2000s, China’s fast-growing economy funded the army’s transformation. According to the Stockholm International Peace Research Institute, China’s defense budget rose from $18.3 billion in 1984 to $188 billion in 2014.

The ground forces cut manpower from 3.6 million to 1.6 million. The Chinese army now has just 15 infantry divisions and one tank division, plus 16 smaller tank brigades. The infantry no longer walk into battle—and have traded their spinach-green uniforms for green and tan pixelated camo. Chinese military exercises stress “realistic combat situations.”

In 1979, China’s navy was a “green-water” force that mostly stuck to coastlines. As a strictly defensive fleet, it would have been a mere speed bump to the U.S. Navy.

China had 11 destroyers and 12 frigates, 75 submarines and more than 140 missile-armed patrol boats. All of the ships were at least a generation behind U.S. and Soviet ships. People’s Liberation Army Navy ships had outdated missiles and lacked helicopters. The PLAN’s most numerous and reliable weapons were World War II-era guns, torpedoes and depth charges.

Still, Beijing had deep-water ambitions. China built a single Han-class nuclear attack submarine, but the development process was so difficult it would be another seven years before another Han appeared.

Xia, which for a long time was China’s lone nuclear ballistic missile submarine, was rumored to have had a twin that caught fire and sank in port in the mid-1980s.

Today, the PLAN is a completely different force. The latest generation of surface warships—the 054A frigate, 052C air defense destroyer and 071 amphibious transport dock—appear identical to their Western counterparts … at least on paper.

Today the Chinese navy is a blue-water force that can deploy anywhere in the world. Destroyers, frigates and tankers regularly sail to the the Horn of Africa to participate in the international anti-piracy mission. Naval task forces sortie through the Miyako Strait into the Western Pacific, much to Japan’s irritation.

In 1979, the People’s Liberation Army Air Force was the third largest air force in the world, with 4,000 planes and helicopters. It was also one of the largest collections of obsolete airplanes.

The vast majority of Chinese combat aircraft were at least a generation behind Western and even Soviet models. The mainstays of China’s fighter fleet were Chinese copies of Soviet MiG-17 and MiG-19 fighters. In those days of accelerated aircraft development, these 30-year-old designs were practically worthless.

Some analysts even thought China still operated a fewTu-4 bombers—copies of the America’s World War II B-29.

The latest Chinese fighter jet was a clone of the Soviet MiG-21, a 20-year-old design. There was no room in the defense budget for a modern, expensive air force. In 2011 dollars, China’s defense budget in 1979 was somewhere around $3 billion—a pittance for an army that numbered in the millions.

By 1979, the PLAAF was already pondering advanced designs that would match NATO and Soviet planes. Over the next decade, Western aerospace firms would contribute technology, particularly avionics, engines and weapons.

Unfortunately for China, all joint development work with Western companies ended with the 1989 arms embargo that followed the Tiananmen Square massacre. Chinese engineers spent several years trying to catch up.

And with some industrial espionage and a lot of help from Russia, catch up they did. The PLAAF of 2014 is probably the most high-tech arm of the entire People’s Liberation Army. China is one of only four countries developing a stealth fighter.

Within a single generation, the PLAAF went from a backward collection of antiques to one of the most advanced air forces in the world. It retired older planes so quickly it actually grew smaller as it modernized.

As The Chinese War Machine makes clear, the modern People’s Liberation Army has a humble past. China’s military modernization over the past 35 years has been an astonishing feat.

That said, the PLA still has a long way to go to match America.