Boom: The Army Just Invented a Newer, Deadlier Artillery Round 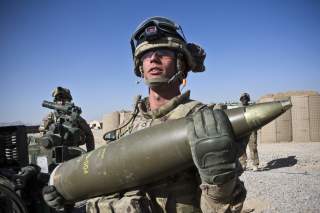 The Army’s now underway LRPF program is grounded in an effort to engineer a host of new technologies to massively extend range, blast effects and guidance technology for artillery, rockets and missiles, among other weapons. One of the weapons now being prototyped, called the Precision Strike Missile, or PrSM, is a surface to surface missile that can reach ranges up to 500km. This kind of weapon naturally impacts the tactical and strategic equation as it will enable ground forces to destroy enemy targets at much greater ranges, therefore keeping attacking forces at safer standoff distances; it could attack fixed enemy structures, troop locations and other assets such as air defenses to facilitate U.S. air superiority over hostile airspace.

“We have many different experiments that are going on for Long-Range Precision Fires,” Army Vice Chief of Staff Gen. Joseph Martin told Warrior in an interview last Fall.

The LRPF will replace the aging Army Tactical Missile System.

The ARL initiatives include the development of lighter weight metal alloys, the use of titanium as an alternative and new geometries for metal casings designed to surround explosive materials.The goal of the effort, McWilliams explained, is multi-faceted -- aimed at engineering the ability to tailor a “package to be threat responsive.”

The fragmentation pattern emerging from explosive effects performs essential attack functions as it can determine the kind of impact a weapon has. A wider-spanning, or more dispersed release of fragments might be more effective against groups of enemy fighters, whereas more narrowly released fragments might prove more effective against fixed structures or enemy armored vehicles.

“Right now if you have a fragmentation casing, you kind of get what you get. When it blows up you get a certain range, and a lot of the fragments aren’t useful. We want to be able to control that so lethality is increased,” McWilliams said.

McWilliams likened the goal or intended effect of some rounds to a “fragmentation grenade on a larger scale.”

“Some materials currently available cannot survive things like gun launch or crashing into targets at very high speeds to cause effects. We are developing novel materials with high strength and high toughness,” McWilliams added.

The current effort is focused on developing new, complex casings for ammunition rounds which can help weapons achieve greater penetration along with more varied or tailorable fragmentation and explosive effects. Newer, lighter weight casings can, for example, allow developers to rearrange and redistribute explosive materials within a given round to improve its lethal effects. 3D printing technology, which relies upon computer design models, can enterprise and build new product configurations not otherwise available.

“Eventually we want to learn how to control the explosive on the inside blows up and how that makes the fragmentation have a certain pattern size and velocity,” McWilliams said.

In addition to the PrSM, the Army LRPF program, which is of course part of the inspiration for the ARL research into new materials for weapons, the Army is prototyping a new artillery weapon able to more than double the range of existing artillery cannons, called Extended Range Cannon Artillery. As part of the developmental program, the Army has demonstrated the new XM1113 and Excalibur M982 munitions, discharged from a prototype ERCA self-propelled howitzer. The new ERCA weapon is designed to hit ranges greater than 70km, Army developers said.

“When you are talking about doubling the range you need a longer tube and a larger caliber. We will blend this munition with a howitzer and extend the range. We are upgrading the breach and metallurgy of the tube, changing the hydraulics to handle increased pressure and using a new ramjet projectile – kind of like a rocket,” a senior Army weapons developer told Warrior Maven in an interview earlier this year.

The service demonstrated a modified M777A2 Howitzer with an integration kit for the mass mock-up of the modified XM907 ERCA cannon at Yuma Proving Ground, Arizona.​

The ERCA is currently being configured to fire from an M109a8 Self-Propelled Howitzer, using a 58-Cal. tube; the existing M109a7, called the Paladin Integrated Management, fires a 39-Cal. weapon.

There appears to be a pressing need for the U.S. Army to quickly evolve new long-range land-attack weapons, according to details offered in a 2019 RAND Corp. study called “Army Fires Capabilities for 2025 and Beyond.” The study not only cites threats from Chinese multiple rocket launchers with ranges greater than 200km, but specifically points to fast-emerging Russian threats.

In his conversation with Warrior, Martin discussed the Army’s LRPF priorities in the context of a broader strategic pivot into a new era of great power conflict.

“We’ve got equipment platforms that are over 40-years-old now, and we’ve got to replace them, so while we’ve been busy focusing on the Middle East, our adversaries in China and Russia have been working on capabilities to deny our capabilities,” Martin said.