BOOM: China Is Showing off Their New, Shiny Weapons of War 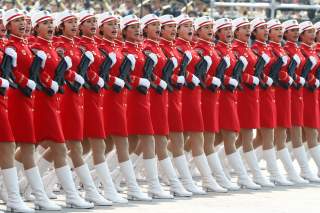 A military parade through Tiananmen Square, part of the Oct. 1 celebration of the 70th anniversary of the founding of the People's Republic of China, showcased some of the People's Liberation Army's never-before-seen weapons systems. With the display, China sent a clear message about how far along the development path its yearslong military modernization drive had taken it.

Among the equipment that was rolled through the streets of Beijing included public debuts of a number of strategic and tactical weapons and systems, from a new assault rifle on the lower end all the way to strategic nuclear weapons. The parade revealed the areas of focus for China in the military sphere.

The DF-41 road-mobile intercontinental ballistic missile is the most advanced such missile in the Chinese arsenal. Each DF-41 can carry multiple warheads, has a range of about 13,000 kilometers, and represents a leap in survivability over the older DF-5 due to its mobility. Because it is solid-fueled, it can be launched rapidly, offering less time for adversaries to target it.

The DF-31AG is another solid-fueled road-mobile intercontinental ballistic missile in service with the People's Liberation Army Rocket Force. Unlike the more capable DF-41, however, the DF-31AG missile is equipped with a single warhead and has a lesser range: 11,000 to 12,000 kilometers.

The JL-2, a submarine-launched ballistic missile, also made its public debut this year. With a range of about 7,000 kilometers and equipped with a single nuclear warhead, the JL-2 represents the core of the Chinese seaborne nuclear deterrent. Each Chinese Type 094 nuclear ballistic missile submarine carries 12 JL-2 SLBMs.

The DF-26, the so-called "Guam killer" missile due to its ability to reach the island that is home to numerous U.S. military bases, made a repeat appearance in this year's parade. The DF-26 is a road-mobile intermediate-range missile with a range between 3,000 and 5,500 kilometers. Unlike the DF-41 and DF-31AG, the DF-26 is used in both nuclear and conventional roles. When equipped with maneuverable conventional warheads, the missile could be used to target distant enemy bases as well as enemy ships.

One of the most intriguing new additions to this year's parade was the DF-17 hypersonic glide vehicle (HGV). With an estimated range of 2,000 kilometers and the reported ability to carry both conventional and nuclear warheads, the DF-17 is able to penetrate even very well-defended targets with a very high speed (in excess of Mach 5) and a maneuverable warhead. The DF-17 is one of the first HGV-type missiles that are entering service among the world's most advanced militaries.

China revealed for the first time its new DF-100 road-mobile cruise missile during this year's parade. A significant improvement on the previous CJ-10 cruise missiles, the DF-100 has a range of between 2,000 and 3,000 kilometers and is reportedly capable of flying at hypersonic speeds. Their low-altitude flight path makes cruise missiles harder to detect than ballistic missiles. The combination of range and maneuverability enhances China's long-range strike capabilities.

This year's parade marked the debut of the WZ-8 supersonic reconnaissance drone. While not much is known about the drone, it is likely attached to and launched by a larger aircraft such as an H-6 bomber and it then lands on its own following the completion of its mission. The WZ-8 will allow China to improve its ability to gather intelligence over areas that are well protected by enemy air defenses.

On display Oct. 1 was the GJ-2, otherwise known as the Wing Loong 2, an unmanned aerial vehicle used by the Chinese military in a role equivalent to that of the Reaper in U.S. service. Capable of long loiter times and able to carry a large payload of missiles and bombs, the GJ-2 is suitable for persistent surveillance over battlefields, precision strikes on key targets and the ability to support friendly troops in direct fights with an adversary. Its lack of stealth and speed, however, significantly reduce its survivability over heavily defended enemy targets.

China Lifts the Veil on Its Advanced Weaponry is republished with the permission of Stratfor Worldview, a geopolitical intelligence and advisory firm.