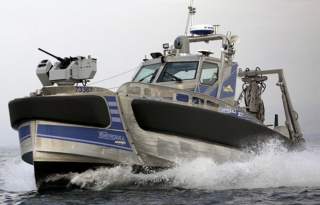 Key point: Some drone ships are built to operate for a long time and take a lot of punches while fighting.

HAIFA, Israel – It’s Friday afternoon, and several Elbit representatives are standing at Haifa Port alongside their guests, representatives of a foreign country’s defense establishment. The former are explaining to the latter the advantages of the boats anchored alongside them, in an effort to zero in on a purchase. Haaretz reports. Continue reading original article

21 Oct. 2019 -- It isn’t immediately obvious why the foreign country should purchase these unmanned boats, but a naval expert could probably spot the difference immediately. The passenger compartment is significantly smaller than that of similar vessels, with room for only four people, and it has no bathroom, bunks, or galley.

Even more interesting is what’s going on below deck, where most of the space is devoted to the computers responsible for the vessel’s operations. The control room is significantly larger than that of similar vessels, as is its climate control infrastructure to preserve the temperature at which the computers operate. Moreover, almost all this boat’s mechanical and electrical parts – the fuses, generators, batteries and alternators – come in pairs.

The reason for this vessel’s unusual structure and redundancies is that it is meant to operate without any people on board for anti-submarine warfare and other tasks, so there will be no one to replace a burnt fuse or fix the generator. If a component fails, it will continue to operate with the replacement component.