Boom or Bust? Expect America's Economy To Change In The 2020s 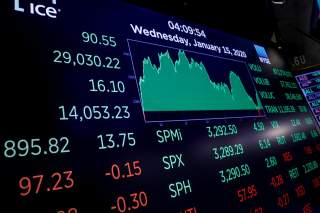 How will economists look back on the economy of the 2010s — as the longest economic expansion in US history, or as a period in which the US was stuck below three percent growth for ten years? And looking to the future, how might population growth, trade, Big Tech, and new innovations all affect America’s capacity for economic growth? Peter Klenow and I recently discussed this on last week’s episode of Political Economy.

Peter is the Ralph Landau Professor in Economic Policy at Stanford University, as well as the Gordon Moore Senior Fellow at the Stanford Institute for Economic Policy Research. In the past, Klenow served as a senior economist at the Federal Reserve Bank of Minneapolis. His work focuses on the macroeconomics of growth, productivity, and prices.

Pethokoukis: As we record this, we’re entering a new decade. Looking back, how do you think economists will remember the 2010s? As an impressive decade, since we’re in the middle of the longest economic expansion in US history? Or will they look at it as a disappointing decade in which the economy puttered along at about two percent growth, which is slower than the post-WWII average? How will they — and you — look back on the 2010s, economically?

Klenow: Well, cyclically, it looks great, like you said, in terms of the unemployment rate falling more or less continuously and employment rising. But in terms of incomes per worker, it’s been much more disappointing.

Looking back, we had that slow growth period after the oil embargo in the early 1970s — it lasted some twenty years. And then we had this freak period of ten years of rapid growth. And maybe we told ourselves when the economy then grew slowly from like 2005 to 2010 that that was partly the after-effects of the Great Recession and the global financial crisis. So I think we would be disappointed when we look back and say that the growth rate didn’t pick back up again, with productivity growth averaging something like one percent. So in terms of output per worker per hour, it’s been really disappointing I think, from the longer run perspective.

Given demographics, it’s sort of hard to grow fast like we did in the 1960s. People point to that time as an era of very fast growth, but of course we had a lot faster workforce growth and population growth back then than we do now.

And the demographic trends are pretty much baked in the cake, so isn’t the problem really the productivity growth that we haven’t seen pick up after that sort of spurt from the mid-90s to about 2004-2005?

Right. The direct effect of the slowdown in workforce growth — like you’ve said — slows GDP growth. But that doesn’t bother me so much because we have fewer people, so there should be fewer jobs. That’s a natural slowdown, just like Japan grew more slowly at least in part because of, in their case, maybe negative workforce growth. So those effects are relatively benign. But as you’ve said, the weak productivity growth is much more concerning.

Now, it could be that those two are linked. We’ve certainly seen a strong relationship between start-ups of firms and population growth. So just having more people means more people to operate businesses and run them and start them and work for them. So to the extent that innovation is associated with start-ups and businesses, then slower population growth might be slowing the supply of labor to start new enterprises and innovate.

And, of course, it slows the growth rate of the size of the market, which could also affect the profitability of innovation. So there could be some really interesting feedback effects from slow population growth to slow productivity growth that operate through innovation, not just through starting up businesses, but even through incumbent firms. If there’s less population growth, there’s less growth in the number of people to do research, which is why in some of your earlier podcasts and blog posts you talked about things like immigration of high-skilled workers and how that might help the US address its weak productivity growth.

If you read the business pages, it seems that for the past decade there were all of these amazing companies coming out of Silicon Valley that everyone had high hopes for. How many times have we heard the stories about the potential impact of smart phones, everybody has a supercomputer in their pocket? And people thought at some point we would see that stuff somehow result in greater and faster innovation, and that would transfer to productivity growth, which would transfer into faster economic growth and maybe offset those demographic issues.

But, is that not happening, or are we just not able to measure that it’s happening?

I think that it’s more than just the measurement problem, though I do think measurement is part of it. The government is well aware of this. The Bureau of Labor Statistics, for example, is responsible for measuring inflation that they subtract out of nominal GDP growth to arrive at a measurement of real growth that feeds into productivity.

So they’ve known for a long time that it’s really hard to measure the benefits of brand new products, or even improved versions of existing products. Their sense is that they might be missing half a percent per year, one percent per year. But it hasn’t necessarily accelerated, what they’re missing.

It’s sort of always at least for decades, kind of missed it by the same amount. So it’s not getting worse?

Yeah, they don’t see any evidence that it’s getting worse. It may have gotten worse in the IT sector and the heath sector, but gotten better in some other sectors. And it’s hard to estimate something you have a hard time measuring, of course. It’s like measuring the black market. But when measuring the magnitude of the understatement, we don’t find a lot of firm evidence that the problem’s gotten bigger.

So the economic impact of the internet and sort of the information revolution: Was it just a ten-year thing, and that’s it? You know, from the mid-90s to the mid-2000s, we had this higher growth, real things were actually created, and there was real productivity growth. Now, there are a lot of pessimists who say that the Internet was an important technology, but it didn’t match up to some of the great general purpose technologies of the past like electrification or the combustion engine. Does it turn out that the internet just isn’t as important for productivity as those technologies?

That could well be. I’m still hoping in the future, if you broadly include things like artificial intelligence and machine learning, that we’ll maybe get much bigger productivity gains in the future than what we’ve experienced so far.

I’m sympathetic to your statement that maybe we got a ten-year burst of productivity growth from it, but another thing to keep in mind is that this was still pretty good. If productivity grew at two and a half percent or more when it was otherwise on a one percent trend over ten years, that’s accumulating over 15 percent productivity level boosts. Though I grant your point that this would be much smaller than estimates of the productivity benefits of things like electrification.

And then there’s still the unmeasured growth. People are saving a lot of time because of a lot of things they can now do with their smartphone. That is worth something even if it’s not showing up in measured output per hour of work.

Do you expect us to get better at measuring some of this output that’s difficult to measure, or is that just always going to be a difficult thing to do?

I am kind of optimistic about that, because I feel like we’re in a golden age for economics. Now maybe people outside economics don’t see it that way.

Well, I don’t know much time you spend on Twitter, but according to Twitter at least, this has been a terrible time for economics — the profession needs to be blown up and rethink everything, it’s failed and now it’s time for a new economics.