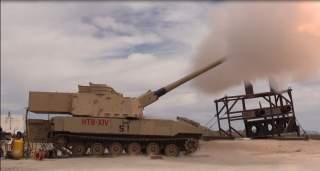 The U.S. Army just fired two 155-millimeter-diameter howitzer shells out to a distance of 40 miles.

The current, standard Guided Multiple Launch Rocket System rocket flies as far as 43 miles. A new extended-range version of the GMLRS, which the Army hopes to field starting in 2020, flies more than twice as far.