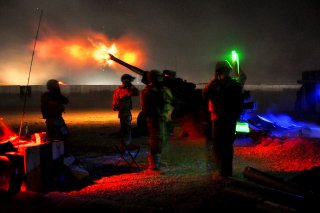 Will the U.S. Army’s future artillery be operated by robot gunners?

A new Army research project calls for developing autonomous systems that can perform functions such as loading shells into cannon. It also follows another project that aims to replace forward observers, who call in artillery fire, with robots.

The research solicitation calls for developing “autonomous robotic systems that are capable of semi- and fully autonomous munitions handling inside a weapons system. Its functions would support loading of projectiles into the cannon breech, setting of charges and propellants, and management of excess case materials inside of the weapons system.

A M109A6 Paladin, a self-propelled 155-millimeter howitzer, is operated by a crew of four: a commander, driver, gunner and loader. It is not clear which crewmen could be replaced by robots should this technology come to fruition, though the gunner and loader would seem to be prime candidates. At the same time, given advances in self-driving vehicles, it is conceivable that the driver could be replaced by a robot, which would leave the commander as the human element of the system.

But even the Army acknowledges there are risks, such as being hacked. “Potential solutions should consider the need for compact form factors, low electronic signatures, cyber security protections, shock and vibration management, and power supply constraints,” said the research solicitation.

But even human gunners may end up looking like robots. The Army wants exoskeletons to assist its artillery crews with the physically strenuous task of operating the weapons. – and to keep gunners from going deaf. The project aims to develop “passive or active exoskeleton capabilities to assist crew-served artillery systems. Desired capabilities will mitigate injury due to human manipulation of objects weighing greater than 100 pounds as well as repetitive motion injury. Additional needs include solutions to mitigate the effects of exposure to high decibel acoustic transients and continuous acoustic signatures consistent with crew-served weapons system operations. Potential solutions will address harmful environmental exposure without impairing communication or sensing of the local environment, be capable of sustained operations, and not require extensive training.”

The Army is also eager for autonomous vehicles that can haul ammunition to the big guns. Currently, shells have to be crated, loaded and transported to a depot, and then unloaded, uncrated and transferred to a Field Artillery Ammunition Support Vehicle (FAASV). The FAASV then trundles forward to the artillery batteries, where the ammunition is transferred to the guns by hand.

But wouldn’t it be nice if robots could do the heavy lifting? The Army is looking for “autonomous robotic systems for transport of munitions in a state of storage to accelerate timelines and reduce personnel requirements. Solutions should enable unmanned unloading of crated and palletized items of various sizes from transport vehicles, and the stocking of primer and fuse boxes, propellant canisters, and uncrated projectiles onto the FAASV or alternative system for transport to the gun line. Alternatively, this system could deliver munitions to the gun line itself.”

Or how robots that transfer the shells from the FAASV to the guns, rather than making the gunners sweat? The Army wants autonomous ground vehicles or aerial drones “for autonomous delivery of field artillery munitions from the FAASV, alternate vehicle, to the weapons system for tactical last mile resupply. Technologies must autonomously deliver a payload of sensitive items across unimproved terrain with a minimum payload capacity of 150 lbs. over distances of 1 kilometer or under.”