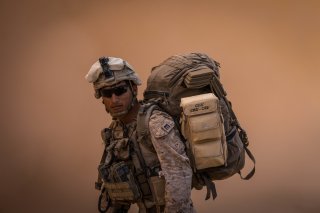 Earlier this month the United States Marine Corps began to field test a new plate carrier vest that features a more streamlined cut while cutting the weight down by some 25 percent over the current vests. The new Plate Carrier Generation III (PC Gen. III), which began development three years ago as part of a joint collaboration with the U.S. Army's Program Executive Office Soldier, will be first deployed to the infantry and other combat-arms Marines.

Then it will be issued to supporting units in an effort to reach full operational capability by fiscal 2023.

Nearly 15,000 more Marines – both male and female – will be able to fit into the new body armor, which will also be available in more sizes than the legacy system.

"This system protects Marines on the battlefield," said Lt. Col. Andrew Konicki, the program manager for Infantry Combat Equipment (PM ICE) at Marine Corps Systems Command (MCSC). "The PC Gen. III is important because it is nearly 25-percent lighter than the legacy technology."

PC Gen. III is a lightweight plate carrying system that guards against bullets and fragmentation when coupled with protective plates. PM ICE worked with industry to remove excess bulk from the legacy Plate Carrier, which had been fielded since 2011. The elimination of excess material reduces the overall weight of the system while also increasing maneuverability.

"When you lighten the load, Marines can get to their destinations faster and they’re going to have more endurance, which increases their lethality," added Konicki.

The Marine Corps Times reported that the USMC has been working to develop a lighter body armor to reduce the weight burden and combat load carried by Marines and grunts, which a United States Government Accountability Office (GAO) report said can be as high as 119 pounds. That report from May 2017 found that even an extra 15 pounds of gear could mean the difference between life and death in a firefight.

"Recognizing that the weight of PPE and other equipment could have negative effects on personnel performance, the Army and the Marine Corps have coordinated and developed goals for PPE-related weight reductions and are pursuing some efforts to reduce overall load burdens on personnel," the GAO report noted.

Even by the time of the GAO report's publication, MCSC had conducted a study to analyze the components and effectiveness of a prototype version of the PC Gen. III. The Corps tested both the legacy and prototype body armor systems on various obstacle courses, which included a 15km hike at a fixed pace. The study found that participants completed courses faster but also appeared better conditioned when using the new armor. Marines' mobility as well as ability to handle a weapon also improved.

"The PC Gen. III improves the Marines' ability to shoot and move by eliminating excess bulk from the design, and cutting out the shoulders for a better rifle stock weld," said Lt. Col. Bryan Leahy, Individual Armor Team lead in PM ICE.

As for sizes, the next-generation system is designed to fit Marines from the 2nd percentile female to the 98th percentile male. A curvature in the associated protective plates is meant to accommodate chest and abdomen size without compromising protection.

"I think there's a misconception that all females are small, and that's not always true," said Konicki. "We conducted a study that found the smallest Marine is actually male."