Border Wall Bogged Down By Price 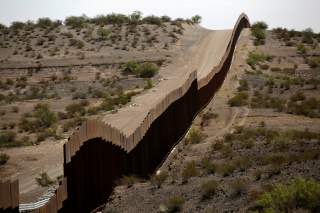 The Pentagon is putting the brakes on three different border construction projects in Arizona and California due to costs constraints.

The Department of Defense will not be able to cover the costs for a plan to build roughly 20 miles of fencing and other infrastructure along the U.S.-Mexico border, according to a Monday court filing Politico flagged. The Pentagon first green-lighted the projects on Aug. 27, but that authorization was made under the presumption that costs would be far lower.

The Pentagon had redirected $2.5 billion from a counter-drug fund for the wall projects. The U.S. Army Corps of Engineers guessed at the time that the counter-drug funds would be enough based on “lower-than-expected contract costs,” but the Army Corps said it would not be able to know the full price until later in the future, Politico reported.

The funds ultimately were not enough to cover construction costs, and the Army Corps withdrew on Sept. 13, according to the court filing.

The withdrawal marks the latest turn in the Trump administration’s attempt to build as much wall along the southern border as feasibly possible, fulfilling a hallmark pledge President Donald Trump made on the 2016 campaign trail.

Acting Customs and Border Protection Director Mark Morgan said in a press conference earlier in September the White House wants to see 450-500 miles of “new border wall” by the end of 2020. Morgan stipulated that there is a difference between what he framed as “new border wall” and “new linear miles.” New linear miles refers to the construction of border wall on ground where no wall or barrier previously existed.

New border wall, on the other hand, typically refers to the replacement of vehicle barriers with new, taller pedestrian barriers. The administration has already replaced 65 miles of vehicular barriers — or otherwise small and dilapidated structures — with new walls, which typically consist of 30-foot tall structures that are built with concrete.

“If you go to those areas where there was pedestrian barriers or their old landing mat, where they can just knock it over the car, or cut a hole in it in seconds — where new wall was going in, that’s exactly what it is,” Morgan said during the press conference. “And if you go out there and ask the agents, they’ll tell you that’s new wall.”

However, it’s still not clear when the administration will break ground on new linear miles.