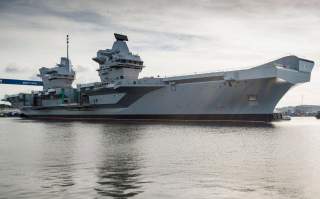 The general election in the United Kingdom on Dec. 12, 2019 could result in major changes for the British military -- in particular, the Royal Navy.

Iain Ballantyne, a naval historian and editor of Warships International Fleet Review, isn’t optimistic. “There are some who will likely do less damage than others,” Ballantyne wrote at his magazine’s website.

Military issues have not prominently featured in the campaigning of any of the leading political parties since Prime Minister Boris Johnson, from the Conservative Party, on Oct. 24, 2019 called for an election.

Johnson has suffered several defeats in Parliament over his plan quickly to withdraw the United Kingdom from the European Union -- the so-called “Brexit.”

Johnson has threatened to pull the United Kingdom out of the European Union with or without concessions from the union that could stave off serious economic harm in the United Kingdom resulting from the country’s loss of easy access to Europe’s markets. But parliamentary defectors from Johnson’s own party doomed the prime minister’s “no-deal” Brexit.

The December 2019 election could determine whether, and how, the United Kingdom finally exits the European Union. That and other issues have trumped military readiness in the lead-up to the countrywide vote.

Recent polling has the Conservatives receiving 39 percent of the vote, versus 33 percent for the left-leaning Labor Party and five percent for the center-left Liberal Democrats. A party must receive win a majority of seats in parliament in order to form a single-party government.

“Brexit, the National Health Service, the environment and the end of austerity were the main issues the three major parties wished to discuss as the final phase in general election campaigning began,” Ballantyne noted. “There were, however, strident promises to ditch the U.K.’s nuclear deterrent emanating from nationalist parties in Wales and Scotland.”

“Huge increases in public spending are being pledged by some parties, but defense does not appear to have been invited to the party,” Ballantyne explained. “The U.K. armed forces have been cut to the bone and yet there is no big uplift in spending to, say, three per cent of [gross domestic product] for defense promised by anyone.”

Funding has stabilized at around $55 billion annually. In 2017 and 2018, the Conservative Party government allocated the armed forces an extra $2 billion, combined, above planned spending levels, enough to employ 196,000 active and reserve sailors, soldiers, airmen and civilian personnel.

The Conservatives, or “Tories,” as they’re known, portray themselves as pro-defense. The Tory platform for 2019 stresses that Britain must “stand up and be counted” in a world suffering from “terrorism, rogue states and malign non-state actors.”

The Tories claim Brexit will allow the United Kingdom to do “more on the international stage,” standing up for “collective security, the rule of law, human rights, free trade” and a “rules-based international system.”

But Ballantyne questioned the Conservatives’ commitment to national defense. “The Tories like to think of themselves as ‘the party of defense,’ but the disastrous 2010 Strategic Defence and Security Review blew a hole in that contention by inflicting damage on the U.K. armed forces that they have not recovered from.”

Aside from giving thousands of sailors and Royal Marines their marching orders – leaving the fleet short of personnel for its new carriers and seeing people transferred from other vessels, so rendering them unable to deploy – frigate and destroyer numbers are at an all-time low, while there have been serious problems with submarine availability.

At a time when other nations are expanding their amphibious forces, rumours persist that the landing platform docks Albion and Bulwark may yet be axed to free up more people for the carriers. British warships remain under-armed and spread too thin around the world and while the [Royal Navy] strains heroically to carry out all its tasks, too much is being asked of too few ships and people.

The rival Labor Party is trying to stake out a strong pro-military position, in part to compensate for the unpopularity of the party’s leader Jeremy Corbyn, Ballantyne wrote. “Labor outlines perhaps the most comprehensive plans for defence and foreign policy.”

It shows that it is keenly aware of the trust deficit it suffers from on defense under Jeremy Corbyn. Democratisation, strident multilateralism, peace-building, enhanced diplomacy and more effective conflict resolution are at the heart of Labor’s foreign policy and security commitments. It intends using Britain’s “global influence to end the so-called ‘bomb first, talk later’ approach to security.”

The Scottish National Party, which opposes Brexit and could play an important role in the formation of any left-leaning coalition government, is alone among the major U.K. parties in opposing the Royal Navy’s ballistic-missile submarines and their Trident nuclear missiles.

Trident represents the United Kingdom’s only nuclear deterrent. Corbyn personally opposes Trident but his own views have not shaped the Labor platform.

“Despite Labor leader Jeremy Corbyn being a dedicated opponent of Trident in the past, there is a clear commitment to the nuclear deterrent,” Ballantyne noted. “There is also a pledge to ‘actively lead’ multilateral efforts towards nuclear disarmament. Whether a continuous at-sea deterrent would be maintained is uncertain.”

Ballantyne pointed out that neither the Tories nor Labor have made firm commitments to significantly raise defense spending. Whoever wins the election, the U.K. armed forces could continue to suffer, Ballantyne explained. “Force levels could fall even further.”