Boundaries of the West: New Criteria Should Judge U.S. and EU Migration Policies 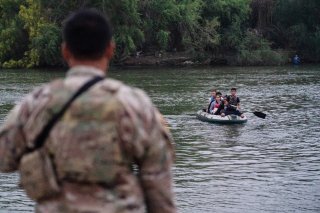 In the United States and European Union (EU), border policies are currently the focus of attention, albeit for different reasons. Frontex, the EU’s border agency is coming under scrutiny for its alleged role in illegal “pushbacks” or irregular migrants at the Turkish border and elsewhere at the EU’s external frontier. In the United States, the Biden administration is grappling with large numbers of arrivals at the southern border.

The issue of border protection against undocumented migration needs to be considered separately from policies for legal migration that, despite the much larger volumes of incomers they produce compared to illegal border crossings, often go almost unnoticed.

As for measures to prevent undocumented migration across external borders, developments on both sides of the Atlantic over the past decade have revealed a huge gap between rhetoric and policy. In theory, the political Left should be opening the borders to relieve the world’s suffering. The Right should be shutting them to preserve the sense of order at home and soothe the sensitivities of those citizens who are skeptical of diversity. In reality, both the U.S. and EU borders are remaining open to millions of legitimate travellers, new legal residents, and workers. This legal migration is tolerated or welcomed by majorities in the United States and EU, with notable skepticism in some EU countries.

The rhetoric of political leaders in the United States and Europe continues confirming the Left-Right mental divide. In practice, both the Left and the Right are aiming to tightly control access to territory and turn back most of those who do not qualify for asylum, applying a rather narrow interpretation of the Refugee Convention.

Resurgence of Authoritarianism in the West

The political importance of protection against undocumented migration stems from the resurgence of authoritarianism in the West since the middle of the 2010s.

The perception of immigration-induced chaos was real in Europe in 2015–16, when almost two million Syrians and other refugees and migrants entered the EU from Turkey. When Eurobarometer, the EU’s opinion polling agency, asked the bloc’s citizens in Fall 2015, 89 percent stated that “additional measures should be taken to fight the illegal immigration of people from outside the EU.” The contribution of intra-EU migration to the result of the 2016 Brexit referendum is well documented.

This EU’s border management and asylum crisis has cemented the grip on power among the bloc’s own autocrats such as Viktor Orbán in Hungary who managed to tap into the fears that the influx of migrants produced among voters. In the United States, accumulated frustration with illegal immigration and an instrumentalized rejection of diversity were the main factors to put in power the authoritarian President Donald Trump as Eric Kaufmann demonstrated in his book Whiteshift. Cultural insecurity is one of the main factors to determine electoral outcomes across the Western world today.

The New Relationship Between Democracy and Border Protection

In full knowledge that the perception of vulnerable borders feeds domestic authoritarianism, mainstream elites in the United States and EU have taken measures to protect the frontiers. However uncomfortably this may sound to the cosmopolitan ear, the new emphasis on the integrity of the external border should be welcomed. Mainstream politicians in Europe and North America know that the numbers of irregular arrivals matter greatly to their voters.

Thus, apart from admitting unaccompanied children to the U.S. territory, President Joe Biden has not substantially altered Trump’s restrictive border measures. In a gesture of political symbolism, Biden has lifted some of Trump’s measures that prevented legal immigration into the country, such as the infamous “Muslim ban.” What gets lost in the partisan noise is that the Biden administration continues expelling three-quarters of arrivals to the southern border.

The EU, guided by the sense that “there will not be a Europe as we know it, if there are no borders,” as the then President of the European Council Donald Tusk put it in 2017, has introduced a series of restrictive policies. These included the coordinated closure of the land West Balkan route, the 2016 EU-Turkey migrant deal, and other similar agreements with the governments of majority-Muslim countries in the EU’s geographical neighborhood. These measures, along with the strengthening of Frontex, the bloc’s border guard agency, have resulted in the reduction of irregular maritime and land arrivals by 93 percent between 2015 and 2019. As a result, the illiberal populists’ revolution that some had predicted for the 2019 European Parliament elections did not materialize.

The Metrics of Success

When observers accuse the wealthy West of hypocrisy for not taking up their share of responsibility for refugees, they are only partly right. Indeed, the West needs to do more. But allowing chaos at the borders is not the way. The United States, EU and other members of the club of developed nations should increase orderly resettlement of refugees from crisis regions in Latin America, Africa, and Asia. Managed resettlement greatly reduces security risks. The selectiveness of the process also enables providing protection to the most deserving—as opposed to the most tenacious who make it to EU or U.S. border.

It follows that we should begin using different metrics for assessing the success of border and asylum policies. Measuring the efficiency of these policies by relieving human suffering just outside our borders seems logical. However, this metric is wrong. Instead, we should concentrate on two alternative criteria. The first is the preservation of democracy at home. The second is the relief of suffering among the most deserving, wherever in the world they find themselves. It goes without saying that the use of unnecessary violence at our borders has no justification.

The presence of suffering in the southern proximities of the West cannot leave us cold. However, it is our foreign, economic, trade, and investment policies that should address poverty, poor governance, and civil conflict. The focus of immigration policies needs to remain one of admission to territory based on the selective provision of asylum and economic interests.

Vít Novotný is a senior research officer at the Wilfried Martens Centre for European Studies, the political foundation of the European People’s Party in Brussels. He focuses on immigration, asylum, and border management.