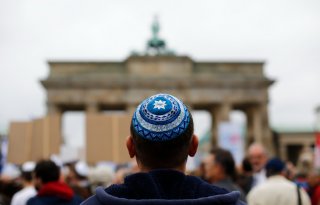 The crisis in higher education, faculty, students, and administrations adopting ideological positions radically at odds from those of most Americans and in the process reshaping institutions, is becoming better understood.

But none of this is new. Another Israel boycott resolution being considered by the Middle East Studies Association (MESA) reminds us that the rot in higher education set in long ago and was focused, not surprisingly, on Jews and the Jewish State.

So deep is the rot that the association seems totally oblivious (or indifferent) to the fact that its ongoing endorsement of the Boycott, Divestment, and Sanctions (BDS) campaign, and attendant efforts to obstruct the containment of resurgent anti-Semitism on U.S. campuses, have effectively crossed the thin line between “normal” Israel-bashing and classical Jew-baiting.

Back in 2015, a MESA referendum approved a resolution which not only lauded the “calls for [anti-Israel] institutional boycott, divestment, and/or sanctions [BDS]” as “legitimate forms of non-violent political action” and deplored opposition to these exclusionary moves as an assault on the freedom of speech, but “strongly urge[d] MESA program committees to organize discussions at MESA annual meetings, and the MESA Board of Directors to create opportunities over the course of the year that provide platforms for a sustained discussion of the academic boycott and foster careful consideration of an appropriate position for MESA to assume.”

Whereas, Palestinian civil society issued a call in 2005 for boycott, divestment, and sanctions (BDS) against Israel; and

Whereas, Members of the Middle East Studies Association (MESA) have organized various forums for discussion and debate of that call through MESA’s commitment to academic freedom; and

Whereas, Israeli universities are imbricated in these systematic violations through their provision of direct assistance to the Israeli military and intelligence establishments; and

Whereas, The United States government has systematically shielded successive Israeli governments from being held accountable for such violations and facilitated them through unprecedented diplomatic, military, and economic support; and

Recalling that the BDS campaign against Israel is one that targets institutions and not individuals; and

Be it resolved that the majority of the MESA membership

(1) Endorses the 2005 call of Palestinian civil society for BDS against Israel; and

(2) Directs the MESA Board of Directors to work in consultation with the Committee on Academic Freedom to give effect to the spirit and intent of this resolution, in a manner consistent with MESA’s bylaws as well as relevant US federal, state, and local laws.

The irony that calls for academics to discriminate against an entire society is cast in terms of alleged infringements on academic freedom is equally blatant but is not especially new. Both overt hostility to Israel and anti-Semitism under the guise of anti-Zionism have for years dominated the field of Middle East Studies, a fact illustrated by the parade of anti-Israel vituperation on display annual at MESA conferences and its routine, almost United Nations-like, condemnations of Israel.MESA has thus gone from merely endorsing the call to boycott Israel to calling on its members to do so, and actively doing so itself. Israeli universities, among the most liberal (and multicultural) institutions in that society, are branded as human rights violators. Individual Israeli academics are not formally targeted but will be in reality, as MESA members evaluate job applicants, visiting speakers, grant proposals, and the like. The litmus test for MESA members, and Israelis, is blatant.

But intellectual intolerance is spreading rapidly in academia and American society. Witness the growing chorus of calls on and off campus, from faculty and students alike that there are “no two sides” to the Israeli-Palestinian conflict and that the Israelis and supporters have no right to even be heard. This is one of the sources of “cancel culture,” smugly self-assured, willfully ignorant, and often resolutely racist.

Like most of academia, MESA seems largely impervious to criticism. But the damage being done is precisely to academia’s standing with society as a whole. As more faculty expose themselves as blindly hateful and anxious to judge, American society has reacted in horror. The collapse in the standing of the humanities and social sciences is matched by the actual collapse of those disciplines in terms of enrollments.

Across the board, from Middle East Studies to English, as academia has become strident, judgmental, and one sided, students and society have fled. An Israel boycott resolution that calls on an entire academic discipline to shun a single society is worse than a crime, it is a mistake. The exposure of Israel hatred and anti-Semitism within high school “ethnic studies” curriculums has caused equal shock and disillusionment.

Individual Middle East scholars are of course free to their own opinions and approaches. But scholarly organizations endorsing discrimination is both a bad look and self-destructive, both morally and practically.

Asaf Romirowsky is executive director of Scholars for Peace in the Middle East (SPME) and the Association for the Study of the Middle East and Africa (ASMEA), Alex Joffe is a senior non-resident scholar at the BESA Center at Bar-Ilan University.