Brace Yourself: The Army's New M-1A2C Is Coming 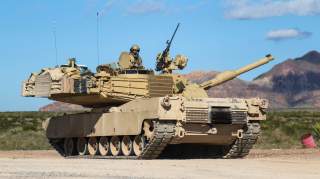 Key point: The Pentagon is constantly upgrading its main battle tank and the M-1A2C is just the latest version.

The U.S. Army’s newest tank has made its apparent operational debut at a multi-national exercise in Romania.

The M-1A2C, previously known at the M-1A2 System Enhancement Package Version 3, appeared in imagery that the U.S. Defense Department published to mark the May 29, 2019 commencement of Justice Eagle, a U.S.-Romanian war game at Romania’s Smardan Training Area.

The tanks appear to belong to 1st Battalion, 16th Infantry Regiment, part of the 1st Armored Brigade Combat Team, 1st Infantry Division, whose home base is Fort Riley in Kansas.

The bulky Trophy hardware is what gave away the M-1A2C’s presence in Romania.

The M-1A2C is the latest variant of Abrams to enter production. The Army in late 2017 accepted the very first M-1A2C Abrams tanks.

After several years of production, the service has enough M-1A2Cs to equip an entire brigade. “We’re in the throes of getting that together,” Hank Kennedy, a manager at General Dynamics’ tank plant in Lima Ohio, told Lima News.

There are bewildering number of subvariants of the M-1A1, each boasting incremental improvements in drive-train, armor and electronics. The latest upgrade, the M-1A1SA, has a factory-fresh engine, digital electronics and a top-secret armor blend that includes a thin layer of uranium.

"The Abrams M-1A2C can host any mature technology the Army deems operationally relevant," the Army stated. The latest version of the M-1 arguably is the best tank in the world. For now.

Russia and China both are developing new fighting vehicles. Russia's high-tech Armata tank has run into development problems. China successfully has fielded hundreds of new Type 99A tanks that roughly are similar to mid-generation, digital M-1s. But China has struggled to adapt old-style doctrine to its new armor.