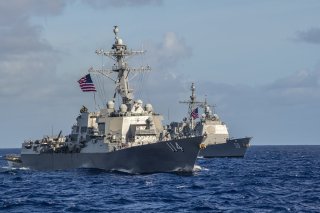 The U.S. Navy’s ship classifications are not always straightforward. Thankfully, the Congressional Research Service offers some clarification on the differences between types of warships.

“As a result, since the 1980s, there has been substantial overlap in size and capability of Navy cruisers and destroyers. (The Navy’s new Zumwalt [DDG-1000] class destroyers, in fact, are considerably larger than the Navy’s cruisers.)

The class has been incredibly successful. It is one of the “longest-running shipbuilding programs in Navy history,” and also one of the Navy’s “numerically largest classes of ships since World War II.”

They are multi-mission platforms that emphasize anti-air warfare and deep, blue-water, or open ocean operations. As part of the class’ anti-air warfare, they are equipped with the Aegis combat system, “an integrated ship combat system named for the mythological shield that defended Zeus.”

In addition, some Arleigh Burke-class destroyers can conduct ballistic missile defense and protect islands or coastlines from enemy missiles.

The Navy explains that the Zumwalt-class are also “multi-mission destroyers with an originally intended emphasis on naval surface fire support and operations in littoral (i.e., near-shore) waters.”

As part of that mission, the class was designed with a pair of 155mm naval guns called the Navy called Advanced Gun Systems. These guns were built to fire an advanced 155mm projectile in support of forces onshore.

The Advanced Gun System was great on paper. But, unfortunately, the projectiles were prohibitively expensive — around $800,000 or more per shot. The Zumwalt program faced ballooning costs and was eventually limited to three ships.

However, the three ships were also outfitted with specially-designed Vertical Launch Cells along the ship’s edges, affording the ship an anti-surface ship and land strike capability to salvage the program.