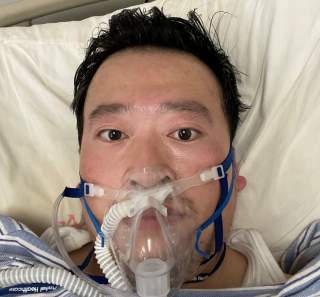 The family of deceased Wuhan whistleblower Li Wenliang, who was investigated for “making false comments” when he posted about coronavirus, was awarded $117,400 (821,000 Chinese yuan) in compensation after he died from the very virus early the morning of Friday, February 7. The announcement that the death was ruled a workplace injury came Friday evening after the central government announced it would send a team to investigate his case earlier that day.

Li became a cause celibre on the Chinese internet after he spoke out about the epidemic and the government’s handling of it.

On December 30, he posted on Weixin, China’s leading chat app, to a group of medical classmates, about “7 confirmed cases of SARS.” The local police investigated him and forced him to sign a document on January 3 apologizing for “seriously disturbing social order.” Seven others were also labeled “rumormongers.” Li later posted a photo of the document to his own Weibo account.

He was not formally charged but warned that he would be legally punished if he continued engaging in such “illegal activities.” After returning to work, he contracted the coronavirus on January 8 and began receiving intensive care on January 12 and passed away February 7.

The news of his workplace compensation began trending as number one on China’s microblogging platform, Sina Weibo, shortly after being reported. The compensation includes 785,020 yuan ($112,100) in one-time compensation and 36,834 yuan ($5,260) in funeral expenses.

In death, Li Wenliang is remembered as a people’s hero and a champion of free speech. Many left flowers outside his hospital. His quote, “A healthy society should not have only one voice,” was shared widely on Weibo.