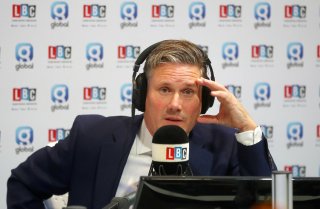 In Britain, the Conservative government is in trouble. Boris Johnson has been dogged by domestic scandal of the kind that baffles foreigners. He has accepted responsibility for holding gatherings in 10 Downing Street that contravened Covid-19 restrictions. Each turn of this months’ long story incenses the public. The war in Ukraine has hardly affected the prime minister’s polling.

This might pass, but Sir Keir Starmer—leader of the opposition Labour party—could be prime minister soon if Conservative fortunes do not improve. Starmer is worth studying. In office, he would shape Britain’s relations with the rest of the world.

Akin to President Joe Biden, Starmer wishes to present his foreign policy as a “return to normal.” Starmer has characterized Johnson as “Britain’s [Donald] Trump.”

Starmer’s individual ideas have some merit, but his prospective foreign policy is still crude. Unlike Jeremy Corbyn, his predecessor, Starmer does not have a decades-long career filled with statements of belief. Starmer is a career lawyer and former director of public prosecutions. His foreign policy is cobbled together from recent history.

Since he was first elected to Parliament in 2015, Starmer has not covered himself in foreign policy glory. He notably opposed British jets fighting the Islamic State group (ISIS) in Syria as well as in Iraq.

Under Starmer, Britain would not lurch into a radical and untested departure from the mainstream—as it would have done had Corbyn been elected prime minister. But Starmer’s platform still has gaps which will need to be addressed.

Otherwise, Starmer’s party risks entering government unprepared and without the capacity to make significant decisions. The current UK government produced the Integrated Review, a strategy for
Global Britain.” Starmer has no strategy of similar depth.

Foreign policy is not an overriding concern for him. Most of Starmer’s day-to-day foreign policy pronouncements are dictated by the advantage they give in domestic politics.

In politics, Starmer emphasizes legalism: process and formality. He does this when addressing Brexit and recent foreign policy crises like the Iraq War and intervention against ISIS in Syria.

Since he became the leader of the Labour Party, Starmer has also shown examples of what I term “strategic silence.” This consists of saying the “right” things on international affairs, but proposing essentially no action.

These are more attitudes than concrete policies.

Starmer has been a consistent and vocal critic of Trump, and British politicians who dealt with Trump in office. His hostility to Trump and the U.S. Republican party might prove a problem. In government, Labour leaders have had to work with Republican presidents, and have found ways to form personal relationships with them. A Republican president in the mold of Trump, like Ron DeSantis, could offend Starmer personally and jeopardize British-American relations. Starmer must show that he is able and willing to work with whoever the American president is, from whichever party he comes.

In a speech given at Tufts in March, David Lammy, Starmer’s shadow foreign secretary, described Putin as taking advantage of the end of American hegemony to invade Georgia, annex Crimea, and keep Bashar al-Assad in power in Syria. Starmer’s foreign policy and defense team have been serious in relation to Ukraine. This has not yet been replicated in other areas. But it could still be.

But Britain’s allies must also wonder. Would Prime Minister Starmer help to contain Chinese expansionism, or join new a counterterrorism mission in the Middle East, or intervene to punish the use of chemical, radiological, biological or nuclear weapons? Labour is so far unwilling to be drawn.

There is still time for Starmer to develop a foreign policy. It can be both realistic and just, legalist and pragmatic. It could set up his party for an ambitious and fruitful time in government. But the work must begin now.