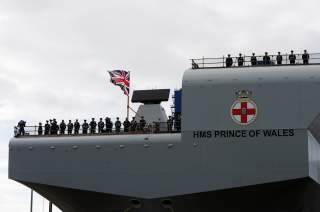 In recent years, the words “Britain” and “defense budget” have been a depressing combination. Even as Britain’s armed forces continue to shrink, the current plan to buy new equipment is so unrealistic that it could damage British military capabilities, according to government auditors.

The current 2019 to 2029 equipment plan, despite a £181 billion (US$234.5 billion) budget allocation, is still far too small to meet defense needs over the next decade, warns a new report by the British government’s National Audit Office (NAO).

NAO cited several cases where funding gaps would jeopardize military capabilities. “For example, the ship RFA Argus provides medical and helicopter training facilities but is due to go out of service in 2024,” auditors found. “The Navy is also due to lose its mine-hunting capability in the early 2030s. Although the Navy believed that this capability needed to be addressed in the 2019-2029 Plan, it does not include funding to extend or replace this equipment.”

While some research money is available to find new minesweeping methods, other problems remain, such as maintaining a sufficient fleet of airborne early warning aircraft. “For example, the Royal Air Force brought forward the date when its E-3 Sentry aircraft will go out of service to December 2022, which is nine months before the replacement aircraft are expected to enter service. It will also reduce the size of the Sentry fleet from six to three aircraft, with effect from January 2020. Air Command’s forecast spending also assumes it will reduce costs by £1.9 billion [US$2.5 billion]. It has not yet determined how it will do this but accepts that the decisions will have capability consequences.”

The Ministry of Defense doesn’t even have a firm grasp of what capabilities are needed, which means it can’t really estimate costs such as acquiring F-35 stealth fighters for the Royal Air Force and the Royal Navy’s Queen Elizabeth-class aircraft carriers. or the cost of operating the carriers themselves. “For example, in the 2015 SDSR [Strategic Defense and Security Review] it announced its intention to buy 138 F-35 aircraft, but the 2019-2029 Plan only includes the forecast cost of the first 48, which are currently being built,” NAO pointed out. “It expects to make decisions on the number of F-35 jets it needs when HMS Queen Elizabeth starts operational deployments in 2021.”

“The Department will make these decisions as part of its Combat Air Acquisition Program. It will also need to make decisions about how it will operate the Carrier Strike Group to make best use of its capabilities. To do this, the Department will have to develop its understanding of support costs as HMS Queen Elizabeth completes sea trials in 2020.”

Budget pressures have created other problems, such as 20 decommissioned Royal Navy nuclear submarines sitting in storage – and no money to pay for disposal for their nuclear reactors. Meanwhile, Brexit has caused the British pound to slump, making purchases of foreign equipment – such as the American-made F-35 -- more expensive.

In the end, Britain is caught in a bind. The British armed forces are structured like an American-style champagne military, complete with expensive aircraft carriers, stealth fighters and nuclear submarines armed with Trident ICBMs. But despite the world’s fifth- or sixth-largest economy (India may recently have overtaken it for fifth place), Britain is only giving its military a beer budget.