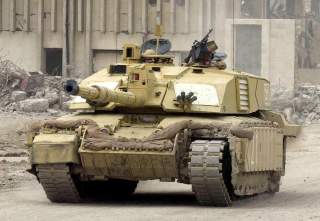 Key point: London's military researchers are looking into electric tanks. This change may prove important if younger, greener men and women are going to sign up for the army.

With electric cars now on the highway, why not electric tanks?

Britain is developing electric combat vehicles. Not just because they’re better for the environment than those old gas-guzzling, carbon-emitting tanks. But also because it will make the military a more attractive career for a new generation of prospective recruits who are passionate about issues such as climate change.

“A key focus will be electric drive systems for future tanks and robotic vehicles,” according to the Daily Telegraph.

“Electric drive systems have the potential to substantially increase fuel efficiency in our combat vehicles, reducing the Army’s carbon footprint,” said DSTL scientist William Suttie. “When paired with other renewable solutions such as embedded solar panels, this technology has the potential to deliver significant cost and environmental benefits both at home and on operations abroad.”

Electric vehicles are already commonplace on the battlefield in recent years, in the form of small battery-operated robots such as the U.S. military’s Packbot and Talon. But these are small vehicles weighing 30 or 100 pounds. A modern main battle tank can weigh up to 70 tons.

“Up to now, electric batteries have not been able to produce the power required to move tanks - weighing over 60 tons - and has been limited to much smaller vehicles,” the Telegraph noted. “However, advances in renewable energy sources now make such aspirations more realistic, especially as robotic systems mean that the weight of a human crew could be discounted.”

It is not clear whether the DSTL project will focus only on large unmanned vehicles, or human-operated vehicles. Either way, it portends a future battlefield could see electric tanks and other armored vehicles.

Indeed, British commanders suggest that military vehicles powered by fossil fuels are on the way out.

British army chief General Sir Mark Carleton-Smith recently said that “the current fleet of military vehicles could be the last generation to rely on fossil fuels and that being more environmentally friendly could help the army to attract recruits,” according to the Telegraph.

“The Army is leading defense on sustainable energy solutions, both at home and when deployed overseas,” Carleton-Smith said. “We may be at the inflection point of how we power our next generation of vehicles. Our current equipment program is possibly the last to be dependent on fossil fuel.”

“That gives the British Army considerable operational benefits, such as reducing our logistical drag, and also puts the Army … on the right side of the environmental argument, especially in the eyes of that next generation of recruits that increasingly make career decisions based on a prospective employer’s environmental credentials.”

Nonetheless, the road to electric tanks is strew with hurdles. First and foremost is what worries any electric automobile owner: recharging the batteries. Fully charging a Prius battery takes two to five hours, according to Toyota. The availability of solar power, for example, depends on factors such as the weather and whether its day or night. These might be inconveniences for a civilian motorist, but life and death for a tank crew engaged in combat on a rainy night.

Nonetheless, hauling gasoline and diesel to the front lines, and refueling vehicles during battle, is no picnic either. If electric vehicles can be made reliable, they may yet replace the gas-guzzling tank.