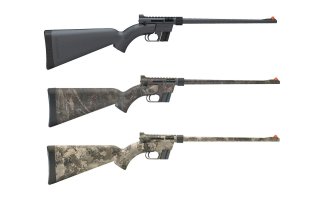 Originally used as a survival rifle for U.S. combat pilots, the AR-7 was built directly as a gun to get you through the harshest environments. Despite being originally military-issued, it has become one of the most popular takedown rifles on the civilian market. Let’s see why.

Like any .22LR platform, you can hit your target with a bullseye up to 50-75 yards. I was plinking away at rabbit-sized targets from about 67 seven yards and in five magazines I didn’t experience a miss. Lack of recoil helps drastically contribute to this rifle’s amazing accuracy. Adding an optic would virtually make a miss impossible at under 70 yards.

The AR-7 was built to be a survival rifle and it certainly lives up to those expectations. As I fired this weapon in snow and rain, I experienced no malfunctions, despite firing over twenty-five magazines.

With few areas for dirt, grime, or water to really get into its inner-workings, the AR-7 is made to be indestructible and fool proof in any environment with any users of varying experience levels. Being critical to the purpose of a survival rifle, Henry really outdid themselves and made this a 12/10 on reliability.

The ease of use is perhaps one of the most redeeming features of this firearm, including Henry’s redesign of the originally faulty magazines for the AR-7. Reloading is simple and easy, and the light weight of this gun makes it extremely easy to quickly aim at even a moving target. The design is so simple that it’s going to be comfortable in any shooter’s hands. Despite having fired competition .22LR rifles, I enjoyed the AR-7 far more due to the extremely basic, user-friendly ergonomics and handling features.

Coming in at around three pounds pull, the AR-7 has such a great trigger for a survival firearm. You would be hard-pressed to find many competition .22s that would have such a great trigger pull, a testament to Henry’s innovative style. The lack of grittiness or choppiness on the trigger came as a pleasant surprise to me, and really is a rare feature for a survival rifle. This adds to the handling and overall comfort of the AR-7, which in turns leads to better performance.

The AR-7s magazines hold eight rounds, about standard for a survival rifle as long, extended mags would not fit into a takedown rifle build. Henry drastically improved their once nightmarish magazines, making them far more sturdy and easier to handle, which in turn has led to smoother reloads.

I found on average my reloads were under six seconds, being extremely easy to reload even while not looking at the weapon itself. My only warning would be not to unnecessarily lose magazines, as this habit could save you in a survival scenario.

Measuring at about 16 inches, the AR-7 isn’t some puny, ineffective .22LR platform. It is intended to be able to hunt small game, and the 16” design really helps add to its accuracy and ability to perform like a true rifle without being an unwieldy size. Weighing 3.5 pounds, there’s no other rifle lighter than this on the market. Pair that with the low weight of .22LR ammo, and you could be adequately supplied for this firearm with nothing more than a backpack.

None. This may seem impossible even for a survival rifle, but the AR-7 has no detectable recoil even if you’re an inexperienced shooter. It’s so light that I did in fact wonder if something was wrong with the gun until hearing identical experiences from other users. This gun is simply fun to shoot.

Pricing at about $250 USD, there’s no excuse not to have one of these rifles. It’s an absolute steal for the level of reliability it provides, and everyone really should own one. Spare magazines will run you about $17 USD per pair however, the only downside to the weapon.

Henry really made this rifle perfect for its role. There are no major flaws in its design, it’s extremely reliable, fun to shoot, and one of the best prices for any rifle in the survival category. Don’t miss the opportunity, this rifle can be extremely handy regardless of how you’re using it, because quite frankly it’s a fun rifle to shoot.