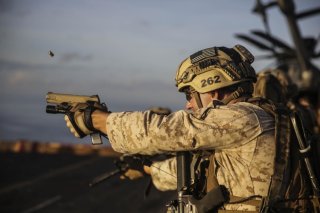 Many “commemorative” products are often mass marketed with the promise of being “collectibles” in the future. The problem is that you can’t really mass produce something and expect it to be rare and unique. That is true whether it is coins, figures, comic books, or even firearms. A lot of commemorative offerings are simply an effort to create hype.

In the case of the Cabot Moonshot, however, it is truly unique. That’s because it is the latest One-of-a-Kind (OAK) firearm from the leading provider of custom 1911 pistols. The Moonshot is built on the long-serving M1911 platform that was developed by the prolific American gun designer John Moses Browning and adopted by the U.S. Army in March 1911.

This particular handgun promises to be like no other, as it features small amounts of a lunar meteorite, small diamonds, rubies, sapphires, and gold inlay, where the Moonshot looks to deliver a dynamic view of our solar system from the perspective of the lunar surface. The various precious materials are meant to represent the planets and stars racing along their celestial paths.

“With the Moonshot, we have pushed the boundaries as to the idea of mechanical art in the form of a pistol,” explained Cabot Founder and CEO Rob Bianchin. “The unique use of rare lunar meteorites and extra-terrestrial materials has never been employed in such a manner. It’s a symbol of both an enduring American design and the accomplishments of America on a galactic scale.”

The custom 1911’s space-black slide provides the perfect backdrop for planetary orbits, shooting stars, and meteorites, as rendered by FEGA Master Engraver Lee Griffiths’ expert touch. In addition, astronauts and the Apollo lunar module are featured on the grips, which were cut out of steel plates, sculpted, and then carefully welded into place.

From an engraver’s perspective it was an absolutely delightful mind-bending challenge to unite heaven and earth. The creation process was a personal and unique way to experience a moon landing vicariously,” says Griffiths.

Cabot’s Bianchin collaborated with Benoît Miniou and the dream catchers (Attrapeurs de rêves) of Parisian design house Les Ateliers Victor to create a timeless capsule in which to store these lunar riches, including the pistol. The case for the special 1911 pistol was crafted from a solid piece of aerospace-grade aluminum and adorned with Egyptian hieroglyphs that articulate an ancient prayer to the stars and moon.

While the average 1911 can be produced in a few hours, the Moonshot was the result of hundreds of hours of design and testing and took two years of painstaking work to create.

The Moonshot is a follow-up to Cabot’s The Big Bang Set, a pair of 1911’s that were created using actual lunar meteorite materials.

The Cabot Moonshot 1911 may already have a new owner—a sale is pending for the handgun, which was priced at a cool $250,000. For those with more modest means, Cabot has announced that it will mint an NFT of Moonshot as the company launches into the Metaverse with a digital collection of Cabot 1911s on the blockchain.

Note: The appearance of U.S. Department of Defense (DoD) visual information does not imply or constitute DoD endorsement.