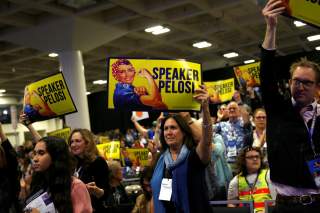 McKinnor, who is black, alleged in the lawsuit that Bauman had criticized her “urban” clothing style and told her that the California Democratic Party is “not ready” to have an African-American such as herself interact directly with major donors.

Dayton said in the lawsuit he was groped twice by Bauman, and Vigna said the former party chairman groped him “nearly on a daily basis” while calling him “baby” and asking to be referred to as “Daddy,” the Journal reported.

Details surrounding the settlement agreements reached for the other two cases are unclear. One involved Bauman’s former personal assistant William Floyd, who alleged the former party chair forcibly performed oral sex on him at least three times between March 2016 and November 2018, and the other involved former video editor Brendan Stepp, who accused Bauman of making unwanted sexual advances.

“Some of the California Democratic Party’s most sacred values are fairness, respect and dignity for all,” Hicks said. “Those values empower so many grassroots leaders and activists to devote their time, talent and treasure to our Party’s candidates and causes.‬”

‪”Moving forward together, we collectively reaffirm a steadfast commitment to our Party’s values to win in 2020 and build a community that empowers every Californian,” Hicks said.

The settlements announced Friday came after the party paid $380,000 to settle a lawsuit in October 2019 from three other party staffers who also alleged discrimination and sexual misconduct by Bauman. The trio said in their lawsuit that Bauman’s conduct was “well-known and apparently tolerated” by top party officials, The San Diego Union-Tribune reported.

Bauman, a former Los Angeles labor leader who was the state party’s first openly gay chairman, had previously denied the allegations against him, saying through his attorney that he “looks forward to complete vindication once the facts come out.” Bauman resigned from his post in November 2018 after the Los Angeles Times first reported the allegations.

Campaign finance records show that the California Democratic Party has spent over $2 million on legal fees related to the allegations against Bauman.