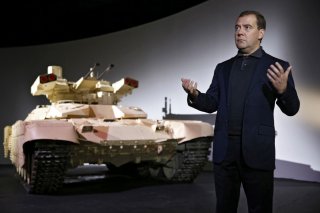 It isn’t a T-800 or T-1000, and it certainly didn’t come from the future, but Russia’s “Terminator” combat vehicles are getting combat-ready. The vehicles are now conducting cohesion drills with tanks and other armored vehicles at the Urals proving ground. The BMPT (Tank Support Fighting Vehicle) was first introduced more than twenty years ago but was never fully embraced by the Russian military. Based on how it performed at the recent exercises, it could soon find a new place among Russia’s armored vehicles.

The crews of the “Terminator” support combat vehicles have been taking part in interoperability drills with units of the Central Military District’s Guards armored division’s upgraded T-72B3M main battle tanks (MBT) at a proving ground near Chelyabinsk, Russia. According to a report from Tass, which cited sources at the Russian Defense Ministry, the exercise was held as part of an experiment to determine how the Terminator could be deployed to support other armored vehicles in a close combat formation.

“The crews for the first time accomplished the tasks of supporting and covering tank crews in an offensive, operating in a single combat order,” the Ministry of Defense’s press office said in a statement. “The firings were conducted from the tank support fighting vehicles’ entire armament that includes two 30mm 2A42 automatic guns, a 7.62mm Kalashnikov machine-gun, AG-17D automatic grenade launchers and Kornet anti-tank missile launchers.”

The press office added that the operational evaluation of the Terminator tank support combat vehicles included an inspection that was conducted by Russia’s Deputy Defense Minister Lt.-Gen. Yunus-Bek Yevkurov.

Designed based on combat lessons gained during the Soviet-Afghan War and later the First Chechen War, the BMPT was developed to serve in a support role for tanks and other armored fighting vehicles in urban areas. The “Terminator” moniker is technically unofficial, but it seems to fit given the platform’s guardian/hunter role.

The multipurpose can provide fire support in its guardian role, while as a hunter is capable of striking light armored targets, tanks, infantry fighting vehicles. It can also operate jointly with battlefield air defense systems to combat enemy helicopters and other low-flying, low-speed aircraft.

The Terminator also lives up to the moniker as it is heavily armed and armored and well suited to combat in close tight streets. The platform is built on the chassis of a T-72 main battle tank (MBT), and it is armed with four 9M120 Ataka missile launchers, two 30-millimeter 2A42 autocannons, two AG-17D grenade launchers and a single coaxial 7.62-millimeter PKTM machine gun. Its anti-tank missile system can reach targets of up to six kilometers, while the Terminator is also quite speedy for its size, and able to reach high speeds. It is operated by a crew of five.

It was only in 2018 that the vehicle was accepted for service with the Russian military and entered delivery. Approximately ten of the vehicles had been delivered that year and those took part in the Victory Parade in Moscow’s Red Square.