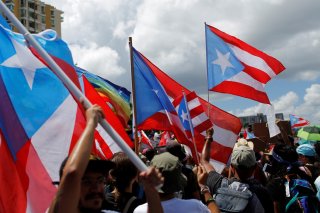 As the United States moves to meet its commitments to defend democracy abroad, there remains unfinished business to ensure democracy thrives here at home. The Department of Defense placed 8,500 servicemembers on heightened alert for possible deployment to Europe as the United States faces escalating tensions with Russia over Ukraine.

These units surely include many servicemembers that call Puerto Rico, a U.S. territory, their home. American citizens of Puerto Rico have historically boasted some of the highest per-capita enlistment rates in the armed forces, yet they are denied equal rights and full democracy.

Despite our service under the American flag, we are denied access to the democratic principles we have been asked to defend countless times. Puerto Ricans have been U.S. citizens since the Jones Act of 1917. More than a century later, Puerto Ricans join the armed forces at a rate more than double that of those residing in one of the fifty states. Yet despite voting for statehood three times since 2012, Congress has failed to take action. Puerto Ricans remain ineligible to vote for our own commander-in-chief, have no representation in the U.S. Senate, and are afforded just one non-voting member in the U.S. House. Making matters worse, our families on the island and returning Puerto Rican veterans are treated unequally under federal laws and policies.

I am among the many men and women from Puerto Rico who signed up to proudly serve America, the nation that has denied us a say in our own government since 1898. I have fought, bled, and sacrificed in defense of American security, but also for our founding values and ideals as a nation. Puerto Ricans have served the United States. in both world wars, Korea, Vietnam, Iraq, and Afghanistan, America’s longest war. We have gallantly answered the call to defend freedom abroad, yet we are denied the most basic of American rights when we return home. This is simply wrong and must come to an end.

Keeping Puerto Rico in a weak, dependent, and dysfunctional territory status not only hurts the U.S. citizens on the island who continue to leave for the states in search of equality. It also hurts America’s national security interests at a time when both Russia and China are seeking to undermine us. America cannot afford to continue down this road.

If the United States seeks to be a credible voice for democracy overseas, if we want to strengthen our position in the global great power competition, we must resolve the issue of Puerto Rico’s political status and ensure that its residents are not treated as a separate class of American citizens here at home. Puerto Rican veterans and servicemembers embody the meaning of selfless service. It is time for Congress to not only recognize that with medals and awards, but to do the right thing and offer us our rightful place as equal citizens with full democratic rights through statehood. An offer of statehood will honor the sacrifices of our veterans, it will honor the sacrifices of our current service members, it will honor the will of the majority of voters in Puerto Rico, and it will honor America’s founding values of democracy, equal justice under law and government by consent of the governed.

SFC Angel Aponte (Ret.) is a decorated combat veteran of the U.S. Army who served in Operation Iraqi Freedom. He earned a Bronze Star and a Purple Heart during his twenty-six years in service. He was raised in Puerto Rico and lives there now. Follow him on Twitter: @sfcaponte