Can America Keep Its Bases Supplied and Online During a War? 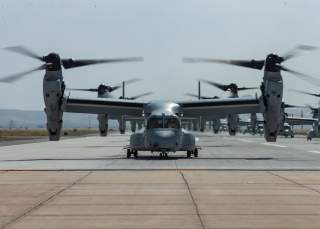 Pentagon officials can’t stop talking about how artificial intelligence (AI), Big Data, robotics, machine learning, and additive manufacturing could potentially revolutionize how wars of the future will be avoided, fought and won.

What is the one critical enabler that is common to each of these technologies? Electricity.

The military needs a lot more quality energy to power next-generation platforms, sensors, robots, AI and directed energy weapons for long periods of time. Energy comes from bases and other infrastructure, which are increasingly at risk and vulnerable.

The Pentagon is very worried about a potential enemy limiting access to installations and ranges in a conflict where critical land-based capabilities live. Of concern is an adversary’s ability to strike large centralized concentrations of U.S. forces forward stationed throughout the world. The solutions are varied and expensive. A sampling includes:

Additional ideas under consideration, according to the Assistant Secretary of the Navy for Energy, Installations and Environment include digital twinning to create utility and telecom replicas for the Pentagon; stationary micro-reactors for long-term energy resiliency; collaboration on the “national development of small cell technology and a 5G network;” and, good old-fashioned cyber hygiene among others. While ambitious, this is just for starters.

New technologies are a major component of the defense strategy’s emphasis on great power competition with China and Russia. But they are just one piece of one part of competing.

The military needs more relationships, more access, more supply, and more energy to marry with its need for more and better tech and weapons. Public-private partnerships with entities like local utility service providers are needed along with industry help to increase water conservation and coordination with first responders regarding usage of the spectrum and telecom networks.

Forward bases and infrastructure are required for force generation. If bases are not secure or resilient, military operations slow or stop. While some allies feel they can no longer “rely on U.S. commitment” to their defense, the Pentagon’s defense strategy calls for the opposite. Leaders are seeking to deepen existing relationships with allies and partners while developing new friends around the world. But not solely out of the goodness of their hearts.

The concern is that adversaries will employ coercion, activism, or economic levers to influence other countries to limit security cooperation activities with the United States, according to testimony from Sec. Niemeyer. Along with those limited foreign partnerships could come restrictions to American access to overseas ports, airfields, telecommunications, and other facilities and infrastructure needed to win "the away game."

This global game of great power competition is already cranking. China has been investing in Mediterranean ports for years, for example. China recently cemented its contract to operate and expand the Haifa port in Israel starting in 2021.

The U.S. Navy’s Sixth Fleet considers Haifa a “major port of call.” Former chief of naval operations Admiral Gary Roughead told the media this means that Chinese port operators “will be able to monitor closely U.S. ship movements, be aware of maintenance activity, and could have access to equipment moving to and from repair sites and interact freely with our crews over protracted periods." Electronic surveillance systems there also threaten military cybersecurity.

Great power competition is also about logistics. Supply and preparation are as important as planning. So too is innovation more than cutting-edge technologies. Inventive collaboration is required for the training and testing of new weapons. This includes the ability to work closely with “federal, state, local and private partners to promote compatible development, relieve regulatory restrictions and leverage resources that sustain critical military capabilities.”

Competing is much bigger than unconventional warfare and much broader in scope than the Defense Department’s reach or responsibility. But thus far, leaders are approaching competition as a brute force-on-force calculation, which does not take advantage of America's strengths or exploit China and Russia's weaknesses.

"Amateurs do strategy; professionals do logistics," as the old saying goes. To effectively implement the National Defense Strategy, this adage is truer than ever. Successful logistics requires relationships, expertise, and tools that often lie outside the defense enterprise. Great power competition is bigger than the military and requires a lot of unsexy work with many disparate organizations and entities to move the needle.

The National Defense Strategy Commission noted the Pentagon’s document does “not articulate clear approaches to succeeding in peacetime competition.” The verdict is damning. America’s rivals are mounting comprehensive challenges using military means and consequential economic, diplomatic, political, and informational tools. Absent a more integrated, whole-of-government strategy than has been evident to date, the United States is unlikely to reverse its rivals’ momentum across an evolving, complex spectrum of competition.”

The United States is already playing catch up in competition—whether in technology, logistics, investments or relationships. It’s past time for a competition roadmap for the Defense Department, the U.S. government, and the nation. The longer we delay, the further we fall behind.

This article by Mackenzie Eaglen originally appeared at Real Clear Defense. This article first appeared in 2019.