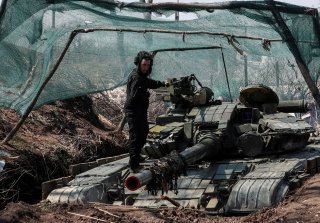 Russia’s 12,420 tanks make it the largest tank force on the planet and roughly six times the size of Ukraine’s 2,596 tanks. That imbalance raises questions about how realistic it might be for Ukraine to deter or repel a Russian invasion.

Russia also fields about twice as many armored vehicles as Ukraine and up to six times the amount of self-propelled artillery. The balance of power in the air is even more extreme. Data from Global Firepower states that Russia operates seven hundred and seventy-two fighter aircraft compared to Ukraine’s sixty-nine.

What strategy could Ukrainian forces use to defeat an invasion? The plan may rely on smart use of terrain, surprise attacks, and the use of American-produced anti-tank weapons. Large Russian formations would need to maneuver and aggregate at certain critical moments, making their force potentially vulnerable.

Javelin anti-tank missiles could help destroy Russian tanks at ranges greater than several miles. Dismounted individual units of Ukrainian soldiers could quietly lodge themselves in attack positions and destroy Russian armored vehicles without being detected. Small units of Javelin-armed Ukrainian fighters would be very difficult for Russian forces to target from the air or the ground.

Ukraine’s eastern territory features more plains than its hillier western regions. However, there are hills, valleys, and forest areas where Ukrainian defenses could try to leverage to their advantage. Ukrainian resistance will also face annihilation from the air given Russia’s overwhelming air superiority. Once Javelins or Ukrainian tanks open fire, they would be likely to give up their location quickly to overhead drones with infrared or thermal sensors able to detect the heat and light signatures emitting from the weapons.

A presence of American or European F-35s could also prevent or defeat an invasion. Sufficient numbers of F-35s may lead Russia to pause and reconsider its invasion plans. Russia is unlikely to be able to deploy aircraft able to challenge F-35s. If Ukraine received air support from the United States and its European partner nations, Russian ground formations would be vulnerable to destruction.