Can Anyone Really Predict What China Will Do in the Future? 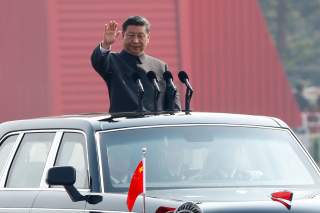 Key point: American grand strategists did not have a better idea than State Department officials of how China would evolve.

The longstanding hope that economic development and engagement with the West would bring about a more open China is rapidly fading as Xi Jinping turns the clock back to practices reminiscent of Mao’s despotism.

In place of those hopes, scholars and pundits are competing to claim the gift of foresight, to be able to say, “I told you so.”

In a recent Bloomberg column, “The ‘China hands’ Got China Wrong, But Listen to Them Now,” my AEI colleague Hal Brands suggests that the key claimants divide into two groups: the skeptical “great power gurus,” who approached the question of China from “the perspective of grand strategy,” and the more optimistic “China hands,” with their “formidable Chinese-language skills and enviable contacts within the Chinese power structure.”

Adopting Isaiah Berlin’s terminology of “hedgehogs” and “foxes,” Brands puts the ‘grand strategists’ in the hedgehog category — people who get “one big thing” right — while the “China hands” are the foxes, masters of tactics and detail. Of course, as they say in the investment business,“ past success is no guarantee of future performance.” Being right once doesn’t mean you will be right the next time. So it is impossible to disagree with Brands that even those “China hands” who may have been wrong in the past should not be dismissed in the future.

However, I don’t agree with Brands that the “great power gurus” generally had a “better sense of China’s geopolitical future” than the China hands. During my forty-plus years of participation in the debate over US-China policy, both within and outside the government and in State and at Defense, some of the most valuable balance to the overly-benign view of Beijing’s ambitions common among many “China hands” actually came from other “China hands.” One of the most important of these was the late James Lilley, subsequently the US Ambassador to China at the time of the Tiananmen massacre, when he played an historic role in aiding the escape of the prominent dissident scientist, Fang Lizhi.  (Much later, Lilley was my colleague at AEI.)

I was lucky to have Jim working with me in both the Reagan and Bush 41 administrations, first at State and then at the Pentagon. At State, it was also my good fortune to work with Ambassador Bill Brown as the Principal Deputy Assistant Secretary, another formidable Mandarin speaker. One of the most thoughtful “China hands,” although better known as a “Vietnam hand,” was Desaix Anderson, who had been the “China watcher” in our Tokyo Embassy (and who is fluent in French, Japanese, Chinese, Vietnamese, and Thai, as well as the Mississippi dialect of English!).

Nor do I agree that “grand strategists” have a particularly strong claim to foresight. The case of Richard Nixon, a “big picture” thinker who was responsible for the historic opening to China in 1973, is ambiguous on this point. Nixon was not motivated by excessive optimism about moderating the horror of Mao’s China, as much as by a desire to find a diplomatic way out of Vietnam. (In that, he may have been more prescient than commonly recognized. Some respected Southeast Asian leaders, including the late legendary Lee Kuan Yew, would say that it was thanks to Nixon’s foresight that China became an effective brake on Vietnamese expansionism after the 1979 invasion of Cambodia.)

However, the two “grand strategists” who managed US-China policy after Nixon and Kissinger, Zbigniew Brezinski and Alexander Haig, placed too high a value on the “China card” in relations with the Soviet Union. Consequently, they conceded much more to the PRC than they should have. (Secretary of State George Shultz and President Ronald Reagan partially corrected that mistake, albeit with some difficulty.) Of course, Xi Jinping himself has cast the “responsible stakeholder” theory, the most recent offering from “grand strategy” to the conduct of US-China relations, on history’s dustbin.

In my view, three other factors that influence the perspective of would-be China experts are much more important than the difference between “grand strategists” and “China hands.”

1.) Understanding the importance of the regime’s communist ideology, and the closely related issue of human rights. I still remember a supposed China expert telling me, when pregnant women were literally being herded into cattle carts for forced abortions as part of the “one child policy” in the 1980’s, that “Chinese women simply don’t regard [abortion] the same way that we do.” In contrast, my counterpart on the NSC staff and later my successor at State, the late wonderful Gaston Sigur, never ceased to remind us, even while working hard to improve US-China relations, that the officials we were dealing with were still communists and that Deng still labeled Mao as 70% right despite pronouncing him 30% wrong.

James Mann, whom Professor Brands references as a China hand, and who was indeed “alert to the emerging rivalry,” believes human rights is perhaps the central issue in US-China relations. “Ending political repression in China,” Mann has written, “is a cause for both liberals and conservatives, both Republicans and Democrats, and everyone else.” So it’s no surprise that he has been skeptical about the communist regime.

2.) Appreciating the interests and perspectives of our allies and friends in Asia. It was no accident that Sigur, an “Asia hand,” with longer experience that most of his government colleagues, was a specialist on Japan, or that Lilley and Brown (and others like Mark Pratt and Mark Mohr) each had deep experience with Taiwan or that Desaix Anderson served in Taiwan.  Unfortunately, since service in Taiwan is no longer as “career enhancing” in the Foreign Service as service in the PRC, that element of balance will probably weaken in the future, unless actively promoted.

3.) Maintaining independence from PRC pressure, even if that means less access to Chinese officials or even to the country itself.  The punishments that the PRC metes out to “China hands” who promote facts and views they dislike is difficult to ignore for anyone whose career depends on access to China. Suspicion that respected “China hands” may adapt their views to accommodate these pressures are not merely “veiled accusations,” as Brands dismissively calls them, nor are they limited to people like Steve Bannon. The experiences of Andrew Nathan (who has been excluded by China since 2001 after editing The Tiananmen Papers) or Perry Link (who has been excluded since 1996, with one brief exception in 2001 to speak in Hong Kong), are well known among China scholars. No small number of younger ones have come to Perry Link seeking advice about the risk to their careers if they criticize the Beijing regime. As the oft-quoted Chinese saying goes, they “are killing a chicken to scare the monkeys.”

If the situation is bad in academia, it is even worse in the private sector where such adverse treatment by Beijing can hit the bottom-line of major corporations.  The recent display of Chinese economic muscle to force out the top leadership of Cathay Pacific because of the participation of some Cathay employees in pro-democracy demonstrations in Hong Kong could not have been lost on executives even in companies less directly influenced by Beijing.

It’s hard to disagree that as the “challenge from China” grows, America won’t have the “luxury of relying on any single source of insight about what that country is up to” – indeed it will have to look at new types of expertise, in subjects like artificial intelligence and quantum computing, along with specific knowledge of China. But for specific knowledge of the country it will be important not only to value Mandarin speakers and experts who enjoy access to Chinese officials (hopefully with a heavy discount). It will require experts who understand communist ideology and the information bias introduced by regime repression, who know and value the perceptions of friends and allies, and whose careers do not depend on the goodwill of Beijing. In other words, a deeper, more nuanced understanding of China than one captured by the metaphor of “hedgehogs and foxes.”