Can Britain’s Prime Minister Turn the Country’s Economy Around? 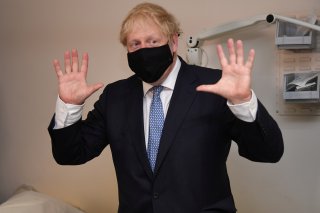 Perhaps to address his declining poll numbers, a result of the public’s view that the coronavirus pandemic has been poorly managed, British prime minister Boris Johnson has proposed £5 billion in infrastructure spending to help spur an economic recovery. However, he shouldn’t oversell the short-term impact of the plan. The bulk of the economic benefits from infrastructure investment come in the long-term, as the best available research can attest to.

The plan calls for the construction of schools, hospitals, housing, rail, and roads to put people to work. In a speech recently, the prime minister said his government was taking a “Rooseveltian” approach, drawing parallels to the U.S. “New Deal” public works program used during the Great Depression. This conjures up images of long lines of men building roads with picks and shovels.

It’s also a misleading view of how modern infrastructure is built. Today, construction jobs, such as those in road building, use advanced machinery and skilled workers. It’s unlikely that laid-off bartenders or waiters could quickly make the transition.

The economic benefits derived from infrastructure investment are real, but take years to come to fruition. For example, improvements to the transportation system increase worker mobility, allowing people to find better job matches for their talents. This raises our productivity and wages over time. And if businesses can move products to their customers more quickly and at lower expense, it facilitates business expansion. Trucks are more productive if they can deliver products to customers in less time, increasing the productivity of private plants and equipment.

Better schools and hospitals represent investments in what economists call human capital. Improvements in education improve lifelong productivity and, therefore, earnings. Better health care reduces the negative impact of chronic diseases, and from an economic standpoint, enables workers to stay in the labor force longer. These benefits promote economic growth, but in most cases, the impact is not immediate.

That makes the government’s focus on accelerating “shovel ready” projects likely to disappoint. As President Barack Obama found out during the Great Recession (and later admitted), there aren’t many projects that can be started quickly. Major construction projects take time to plan and implement. Delays are commonplace, and there can also be legal challenges for environmental reasons, or from residents of communities that will be disrupted. Each reduces the short-term economic impact.

For example, crowding out can occur if government borrowing to pay for infrastructure spending causes interest rates to rise, thus reducing private investment. Or it may occur if people or businesses cut their consumption because the spending creates an expectation of higher future taxes.

Empirical studies based on the history of these projects in the United States and other developed countries suggest that the short-term infrastructure investment multiplier is, in fact, less than one. Estimates range from zero to around .7 or .8. Hiring also tends to be modest. Estimates of long-term multipliers tend to be larger and often greater than one.

If the prime minister’s plan is implemented, then the evidence tells us not to expect an immediate burst of economic activity and jobs. If the funds are put to good use, then the best one can hope for is that the infrastructure projects will pay off in the future. Johnson should pitch the plan as a means for promoting long-term growth, not as short-term stimulus.

Robert Krol is a professor of economics emeritus at California State University, Northridge and an affiliated scholar at the Mercatus Center at George Mason University in Virginia. He is the author of the new study “Will a Burst in Federal Infrastructure Spending Accelerate the Recovery from the COVID-19 Recession?”