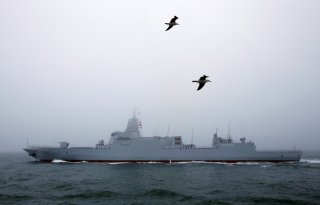 Three of these new Type 055 destroyers are already operational.

While the weapons, technologies, and stealth characteristics of these ships are likely to be of interest to Pentagon officials, the sheer pace of Chinese shipbuilding continues to be a cause of concern. China’s industrial apparatus and ability to rapidly build ships enable the People's Republic of China (PRC) to continue its large-scale Naval expansion at a pace that is tough for the United States to match. Multiple reports say China is on pace to double its fleet of destroyers within just the next five years. The concern, however, is by no means restricted to pure numbers but also grounded in uncertainties related to the relative sophistication and capability of China’s new destroyers. Having more destroyers does not necessarily equate to any kind of maritime superiority if they cannot compete with the range, precision, networking, and overall capability of U.S. destroyers.

Furthermore, the U.S. Navy has as many as ten DDG Flight III destroyers under contract and is moving quickly to modernize their sensors, radar systems, computing, and ship-integrated weapons.

The first Type 055 Chinese destroyer, the Nanchang, looks a bit like a hybrid between the U.S. Zumwalt-class and Arleigh Burke DDG 51 class destroyers. It does have what appear to be some stealthy attributes such as a rounded front hull and smooth exterior with fewer protruding structures, but there are mounted antennas and what look like masts on the back end as well. The helicopter landing area on the back of the Nanchang also looks like that of a U.S. DDG 51.

China's three operational Type 055 destroyers seem to match the U.S. Navy’s plan for three Zumwalt-class destroyers. The kind of weapons range, radar, fire control and computing aboard the Nanchang will most likely determine the margin of difference regarding its ability to rival its U.S. counterparts.