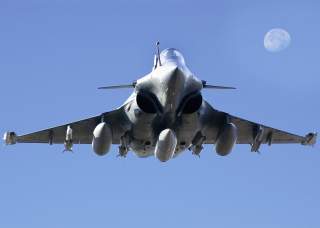 Noteworthy Dassault received the green light to develop the F4-standard for the Rafale fighter when Florence Parly, French Minister of the Armed Forces, paid a visit to its Mérignac plant on Jan. 14, 2019.

Dassault sent a Rafale fighter to Finland for one-week of cold weather testing.

The aircraft was deployed at Rovaniemi Air Base.

The test program was aimed to test the fighter’s performance in sub-zero temperatures during the coldest time of the winter in Lapland.

The cold weather testing program includes engine run-up tests and taxiing on the flight line and a few flights.

According to Aerospace Testing International, the Lapland Air Command is hosting the event but no Finnish Air Force flight operations are associated with the tests, neither is the testing program part of the HX fighter project to find a replacement for Finnish Air Force’s current F/A-18 fleet, said the Finnish Air Force.

The Rafale twin-jet fighter has been used by the French Air Force and Navy since 2004 and 2006, respectively and has been ordered by Egypt, Qatar and India.

Noteworthy Dassault received the green light to develop the F4-standard for the Rafale fighter when Florence Parly, French Minister of the Armed Forces, paid a visit to its Mérignac plant on Jan. 14, 2019.

The F4 standard is part of the ongoing process to continuously improve the Rafale in line with technological progress and operating experience feedback. The F4 standard marks a new step coming in the wake of the standards F1 (specific to the first aircraft of the French Navy), F2 (air-to-ground and air-to-air capabilities), F3 and F3R (extended versatility).

Validation of the F4 standard is planned for 2024, with some functions becoming available as of 2022.

This article by Gabriel Barison originally appeared on The Aviation Geek Club in 2019.