Can Iran-backed Militias in Iraq Still Kill with Impunity? 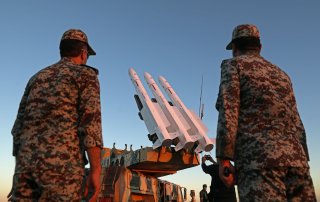 On May 26, the Iraqi Security Forces arrested the prominent paramilitary leader Qasim Muslih, who is allegedly responsible for recent attacks targeting U.S. military personnel in Baghdad’s Green Zone. Muslih was arrested in accordance with Iraq’s anti-terrorism law and is also accused of being involved in the killing of activists. Although Iranian militants have been arrested under Prime Minister Mustafa Al-Kadhimi’s government before, Muslih’s detainment is significant because it marks the first time a leader with ties to Kataib-Hezbollah has remained in custody for more than twenty-four hours, despite mounting pressure from Iranian militias to release him.

Muslih is the head of operations of the Popular Mobilization Forces (PMF), an umbrella organization comprised of Iranian-backed militants who function often outside of Iraqi law. Since the onset of his premiership, Kadhimi has prioritized his commitment to limit Iranian interference in Iraq’s military, economic and governmental spheres. Although the PMF initially entered Iraq’s security force apparatus in 2014 to aid in the country’s fight against the Islamic State, these largely Shiite militias evolved into stringent Iranian proxies.

Despite enacting various pledges and limited actions designed to rectify the malign influence Iranian-backed militias hold over the country, Kadhimi has failed to uphold Iraq’s sovereignty. Since 2019, PMF groups have been responsible for hundreds of deaths of hundreds of protestors, the assassinations of dozens of activists and the societal upheaval that followed.

The series of mass demonstrations dubbed the “Fall Revolution” that swept Iraq in 2019 revealed Iran’s deep entrenchment in the country. The demonstrators who were revolting against Tehran’s clout in the country were in return attacked by snipers carried by Iranian-backed militants.

Once the protests quelled, various PMF groups including Kataib Hezbollah and the Badr Organization continued to murder Iraqi civilians who dared to speak out against Iran. Iham Yacoub, a staunch anti-Iranian activist, was gunned down in her car in August 2020. A week before her murder, Tahseen Osama, another anti-Iran activist, was killed in his business. Several other known activists survived assassination attempts in the same time frame.

In May 2021, Ihab al Wazni became the latest victim of Iran’s systematic political killings. Wazni, a vocal opponent of Tehran and its malign influence in Iraqi affairs, was allegedly murdered by Qasim Muslih. Surprisingly, Muslih has not been released from custody yet. In the past, arrested members of the PMF have been instantly released, perpetuating the notion that Iranian-backed militants can commit crimes and murders without impunity. In June 2020, over a dozen PMF militia members who were responsible for a series of rocket attacks targeting U.S. assets in Baghdad were arrested. One day later, militants suspected of being members of Iranian militias threatened multiple government buildings across Iraq carrying arms, and within hours the arrested militiamen were released.

Clearly, the arrest and subsequent holding of Muslih is a pivot from previous Iraqi policy. The rationale driving Kadhimi’s decisionmaking is likely influenced by foreign actors and domestic strife. In the latest round of U.S.-Iraqi discussions on April 7, the U.S. committed to a full troop withdrawal from Iraq without proposing a clear timetable. Iranian militias are vehemently opposed to any American troop presence in Iraq and carry out consistent rocket and drone attacks targeting U.S. military and diplomatic sites in Baghdad’s Green Zone on a near regular basis. By prioritizing Iraq’s sovereignty above all else, Kadhimi has been balancing Iraq’s relationships with both the U.S. and Iran. If the prime minister shows the United States he will not let Iran function freely in Iraq without any impunity, perhaps the U.S. will be more willing to present clear dates associated with a troop pull-out.  At the same time, the magnitude and frequency of attacks carried out by Iranian-backed militias could be dissuaded if the practice of impunity is squashed.