Can a Joint U.S.-Japanese Marine Force Repulse a Chinese Assault on Taiwan? 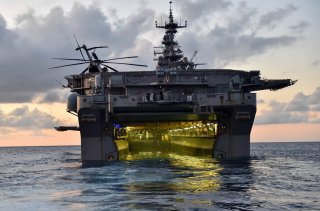 The U.S. Marine Corps is sending a clear message that its force is ready to fight on ocean and island areas alongside allied Japanese forces in the event of any Chinese attack, according to a recently released service video.

The video explains that a recently completed six-month deployment of U.S. and Japanese Marines was not a training exercise but rather a decided effort to replicate and rehearse actual combat scenarios the forces would likely encounter in island areas near Japan and Taiwan.

While the video was clear not to suggest any impending offensive operations or attacks per se, the emphasis was clear that current operations with U.S. and Japanese Marines are ready to fight now. The Unit Deployment Program was specifically described as not being training but rather actual rehearsals of what maritime warfare would involve in the multi-domain area of Japan’s southern islands.

Given its proximity to Taiwan, it seems clear that this area would be essential to any kind of U.S.-Japanese defense against a Chinese amphibious invasion to annex Taiwan. According to Global Firepower, Japan can assemble as many as one million soldiers and Marines if needed for an immediate fight, and part of Japan’s southern island chains are roughly 500 miles or so from Taiwan depending upon the point of take-off. This means that a lethal U.S.-Japanese amphibious force could prove highly effective in any kind of maritime warfare engagement near Taiwan. This would be especially true if amphibious Naval assets such as Lockheed Martin F-35 Lightning II-armed amphibious assault ships or aircraft carriers were close enough to strike. Even some fixed-wing aircraft could take off from Japan or its southern islands to attack approaching Chinese amphibious forces, especially if supported by aerial refuelers.

Could this force get there fast enough without being pre-positioned on the island of Taiwan, given that Taiwan is a short 100 miles from the Chinese coast? It's possible, as any kind of large-scale amphibious attack conducted by China would need some measure of preparation, which could be detected by U.S.-Japanese defenses. Should air superiority be established with F-35s—a scenario which seems quite likely if enough U.S. and Japanese fifth-generation assets were in range—then cargo planes could quickly get soldiers, Marines, and weapons to Taiwan.

This dynamic might be why the Corps continues to fast track its new Light Amphibious Warfare (LAW) vessel configured to support “island-hopping” amphibious warfare scenarios in the Pacific. The new ship could not only help access coastal island areas but deliver large weapons, equipment, and Marines in otherwise difficult to reach areas such as the South China Sea or Japanese islands. These high-risk areas would likely be more difficult for deeper draft ships such as amphibious assault ships to closely approach, but there would clearly be a need to establish and reinforce dangerous combat operations there. This is where a LAW would come in. It could support ship-to-shore landing craft dispatched from a “mothership” amphibious assault ship from greater stand-off ranges, deliver essential land weapons such as mobile artillery or even some armored vehicles.

Speed of response, enabled by proximity and multi-domain connectivity in regions near Taiwan and the South China Sea, would likely prove decisive in any confrontation with aggressive Chinese forces.